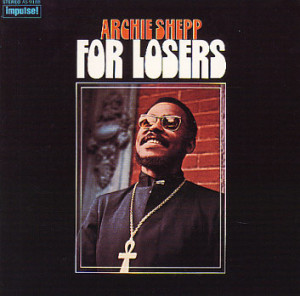 You could look at this album as the greatest waste of talent on vinyl.  You’ve got some of the greatest jazz performers around playing…straight soul charts.  Yet, it works.  Shepp was the brash youngster of the 1960s jazz avant-garde.  He was, typically, a step behind the leading lights, and rarely seemed to deliver on what his talent promised, but, he was only one step behind, and he still delivered something, all of which does count.  Tellingly, the first session for For Losers was just a few days after Albert Ayler‘s New Grass, with the same producer (Bob Thiele).  Additional material from these sessions was later released on the forgettable outtakes collection Kwanza.  In the rapprochement between jazz and rock, Shepp’s style may have ended up being one not pursued by others, usually dismissed as being too deferential to rock/soul structures, but it still holds up on its own terms decades later.