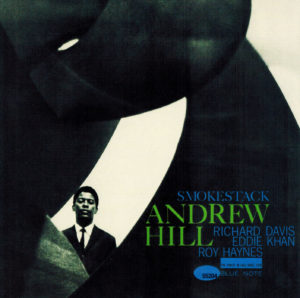 Hmmm. Quite an interesting album.  It was Hill’s second set recorded for Blue Note records, but was kept on the shelf for a few years before release.  The results are successful, but not entirely so.  The most striking feature of the album is the use of double bassist Richard Davis as a lead voice, a position in jazz combos most commonly held by wind instruments or piano.  On songs like “Wailing Wail”, “Not So”, “The Day After” and “Verne”, the effect is spectacular, providing deep shading to Hill’s typically intriguing compositions.  However, Davis is sometimes buried in the mix, and cannot clearly be heard over Hill and drummer Roy Haynes on “Smoke Stack” and other cuts.  To further complicate matters, Haynes seems just a bit ill at ease here.  A hallmark of Hill as a composer is, despite complex structures and arrangements, a strong dominant theme running through his songs.  In that respect it is more interesting to compare Hill with Albert Ayler or Cecil Taylor than more traditional post-bop players or the previous generation of jazz composers.  Here Haynes uses a bit too much space in his drumming, and he is so loud in the mix that this tends to obscure the main themes.  That is one of the main difficulties for a listener approaching this album for the first time.  Haynes was spectacularly effective on Black Fire.  In all, a great set of performances frequently marred by sloppy production, making this just slightly less enjoyable than other Hill recordings from the same time period. 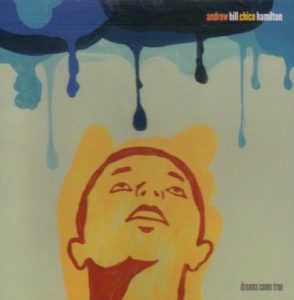 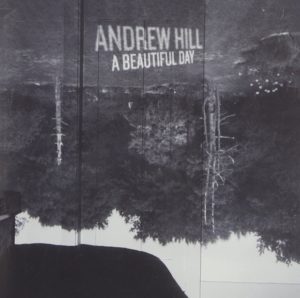 A large ensemble live set, with much of the same personnel from Hill’s successful “comeback” album Dusk.  The group orchestration recalls Hill’s late-60s vocal choir album Lift Every Voice in many ways. 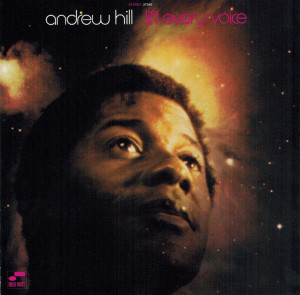 Andrew Hill is known for his chameleon-like style on piano (like Jaki Byard).  Paradoxically, Lift Every Voice is an unusual album because it doesn’t sound unusual.  With a great band in tow, Hill is joined by a vocal choir arranged by Marshall Brown (the mastermind behind Pee-Wee Russell‘s late career comeback).  The vocals take this very much into the territory of commercial-sounding late-Sixties music — reminiscent of Oliver Nelson‘s output for Hollywood or even the likes of Leonard Feather Presents the Sound of Feeling and the Sound of Oliver Nelson.  It is well played, but not particularly moving by Hill’s high standards.  The bluesy “Ghetto Lights” is probably the best offering.  A 2001 CD reissue adds a number of unreleased songs from the sessions that prove to be more interesting than the originally released material; the bonus material is interesting because it diverges from dated Sixties harmonies far more than what was included on the original album and features a bit less of the vocal choir.