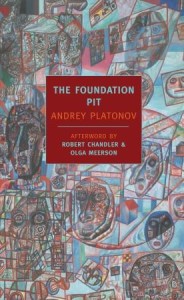 Platonov (born Andreĭ Platonovich Klimentov) has been hailed as one of the greatest writers of the 20th Century — an accolade not widely recognized, in part due to censorship and also its unavailability in many Western languages until more recently.  He is grouped with Kafka and Beckett.  McKenzie Wark has called The Foundation Pit “a critique of the Soviet project in its own rhetorical terms.”  But Platonov’s work was mostly suppressed during his lifetime, with The Foundation Pit completed in 1930 but published only during the glasnost period in 1987, more than 35 years after his death. As described in the notes accompanying an English translation, Josef Stalin even wrote in the word “scum” in the margin of a copy of Platonov’s story “For Future Use.”  Yet his writing survives and his recognition as a prose writer continues to grow.  It also bears mentioning that after his censorship he did continue to write, often anonymously, and for that reason his writings for textbooks in the Soviet Union might even be considered widely read, in their own way.

The basic premise of the novel is the digging of — literally — a foundation pit, for the construction of a great house of the proletariat.  The story unfolds with the workers on site, and in their dormitory, as well as state bureaucrats and other assorted passers-by.  They dig and dig, yet no structure ever materializes in the pit.  The pit just grows wider and deeper.  The novel features nearly picaresque episodes, as the foundation pit provides no resolution or overall story arc (though it perhaps feigns to do so at the start).

Much like Samuel Beckett, or even Alejandro Jodorowsky, Platonov depicts strange symbolic characters and scenes but totally devoid of sentimentality or awe.  In The Foundation Pit, some of the most memorable examples include the Bear, an anthropomorphic “hammerer”, and a caravan of coffins dragged away from the foundation pit worksite.  These are ironic, satiric, and often metonyms.  But unlike Beckett at least, Platonov is specific to his time, which is to say his writing speaks of a particular context.

Another writer who should perhaps be compared to Platonov more closely is William S. Burroughs.  Each played with the language of dominant cultures, in a way sensitive to context, but tried to snip apart the knots that bound audiences to those cultures in a kind of stasis.  For Burroughs, this appeared (literally) in his “cut-up” writing technique, in which he clipped passages from newspapers and other sources, and rearranged them to form new text, the “random” rearrangement seeking meaning outside the context that brought forth the words in their original form.  Platonov used the slogans and symbols of the Soviet government, misappropriated to new ends.  This is not unlike the bastardized pop culture anthropology of the contemporary musician Ariel Pink.  Obviously, the techniques here vary considerably.  Yet there is a revolutionary impulse common to them all.

People who deal with searching electronic databases sometimes suggest a “drunk walk” as a first stage of the process, in which the researcher stumbles about aimlessly gathering preliminary information before returning to the beginning and starting the “real” search, now armed with information from the “drunk walk” about how the desired information is actually structured in the database.  This bears some resemblance to the ways teachers suggest grading papers, by first reading a small sample to gain an orientation of the level of performance of a class, and by reading part of a given paper before going back to the beginning and marking it for grading (and teaching) purposes.  This is a process-oriented approach.  The only abiding assumption is that the first steps will not succeed.

These concepts are found in their own unique forms in Platonov’s novel.  He writes from a perspective that communism is something that everyone (even animals and the environment) desire, but details the flaws in understanding those desires and concomitant mistakes of actualization under dualistic bureaucratic managerialism (Slavoj Žižek in Living in the End Times calls it the “Gnostic-materialist utopia” period of the late 1920s) — a rigid discipline imposed to abandon the “wrong” ways of the past and instead adopt unequivocally “proper” collectivization. But what is unique about Platonov, unlike, say, the pessimistic essentialism found in the anti-revolutionary social democrat George Orwell‘s Animal Farm, is that it is possible to see in Platonov the failures and limitations of collectivization as part of kind of a “drunk walk”, a merely preliminary period of fruitless experimentation.  It was a period of orienting to what was not recognized as the real character of the project at the outset, before the assumptions and presuppositions have been unpacked.  Where Platonov elevates his work, though, is his refusal to consider his topic in terms of right or wrong, but rather suggests that even in the right and good choices there are elements of wrong or bad.  Everything is muddled.  There is no transcendence, no hidden golden path waiting to be discovered, and the very possibility of such things is rejected from the outset.  Yet, at the same time, he suggests a kind of redemption of the past, unlocking communist desires inscribed on everyday circumstances already, rather than seeking to build them up in an uncertain future premised on opposition to the past.  This is Platonov’s most revolutionary aspect.  Orwell implies that people are terrible and revolutionary communism suffers from the same failings as capitalism, so why not just stick with a liberal democratic path towards social democracy and keep working toward a different political economy?  The fact that even the CIA saw Animal Farm as useful for propaganda purposes suggests what little practical threat Orwell’s vision posed to the vested interests of capitalism.  Platonov questions the very basis of what a real revolutionary outlook requires for success, applying every later failure as an opportunity for a continuous engagement with these questions, now robbed of any sort of finality.  The so very socialist concept of dialectics the only uncertain, unsteady constant.

A recurring theme is the balance between the individual and the collective.  Just as one might cringe at the neoliberal capitalist order subjecting people today to the brutalities of “the market” in a way that strips away the last remnants of private life, Platonov has concern for the way harsh “utopian” collectivization leaves no room for the individual in the bureaucratic machinery.  Ostensibly the main character, Vaschev, is fired from a job early on for pausing to consider the future in these terms.  There is an element of psychology at work, reflecting C.G. Jung‘s descriptions of “individuation”.  The individual must be sort of protected from “total collectivization” (or “the market”) in order to be able to survive that sphere with any shred of humanity.

“I knew that when the great guiding spirit cleaves humanity into two antagonistic halves, I will be with the people”

Platonov is often described as supporting “widows and orphans” and such, in the same way.  That is, he sided with society’s most vulnerable.  He always has special concern for the weak, the powerless and the downtrodden.  But mostly he recognized what could be found among ordinary people.  So he shines a gleaming light on Nastya, the orphan cared for by the workers, and even the cantankerous Zhachev, the disabled veteran called “comrade cripple” at one point.  Platonov subtly critiques the ploys to create or recreate power structures in the newly collectivized Soviet Union that eerily resemble imperial Russia, revealing how collectivization was changing society by reorganizing the control of means of production only to retain certain hierarchies of power, much like many of the great sociologists that came along in the same century described (including even Thorstein Veblen, to the extent his work had a sociological character).  The historian Moshe Lewin has even described the Stalinist era of the Soviet Union as a despotic return to the values of the tsarist autocracy.  But, again, unlike Orwell, Platonov does not seem to suggest that any such actions are inevitable, but rather, that the original communist vision in its “drunk walk” merely failed to account for those possibilities sufficiently.  There were presuppositions in the Soviet five-year plans that produced unwanted and unintended consequences.  In “On the First Socialist Tragedy” (1934), Platonov concluded, “It is necessary to stand in the ranks of the ordinary people doing patient socialist work — that is all we can do.”

In the Soviet Union, kulaks (rich peasants) were “liquidated” to eliminate them as an economic class.  In Platonov’s novel, in a play on words typical of the novel, this means quite literally sending them down river on a raft!  But here, we also encounter a kulak mending a bast sandal (a type of woven footwear known for its cheapness and lack of durability, and associated with poverty), which alludes to attempts by the Soviet regime to designate “sub-kulaks” and shade off the original “utopian” duality of peasants as kulaks (rich) or non-kulaks (poor) into a mire that undermines the original intent.  So maybe most remarkably, Platonov tends to not denounce kulaks, or other characters that hide their past connections to privilege in order to avoid liquidation, and instead focuses on siding with the ordinary person.  One of the most likeable (and unique) features of his writing is that it welcomes anyone willing to commit to the communist endeavor — anyone willing to promote equality from the standpoint of the ordinary person.

The Foundation Pit was translated to English twice by Robert Chandler, who has noted that the second (in 2009 for NYRB Classics, with Elizabeth Chandler) contains a more definitive Russian source text and is informed by intervening Platonov scholarship.  Because of Platonov’s fondness for puns, Chandler’s efforts to capture those elements as faithfully in translation are laudable (even if this reviewer is in no position to judge his success in that regard).