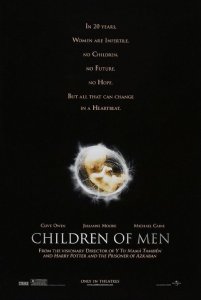 An adaptation of the P.D. James novel The Children of Men (1992), deals with a dystopian near future period in which humans as a species have become infertile.  The film makes heavy use of symbolism, metaphor, and incorporates references to broadly contemporary political situations.  Theo (Clive Owen), an unassuming nobody, is pulled into a conflict by a “terrorist” group “The Fishes”, who are fighting against a fascistic government in England.  The youngest person in the world has just died.  But Theo’s former wife/girlfriend Julian (Julianne Moore), who is a leader of sorts in The Fishes, has come to the know Kee (Clare-Hope Ashitey), the first woman to become pregnant in 18 years.  The goal is to get Kee (like “Key”, get it?) and her child to “The Human Project,” a mysterious group supposedly starting a remote colony away from fascistic England.  Theo is a broke hack, grudgingly helping the “terrorists” in exchange for payment. But as he interacts with these terrorists, he is revealed as an apostate activist, tormented by the death of his child years ago, who can’t help but to do the right thing no matter what danger that puts him in.

In an sort of thematic archtype, The Fishes betray their revolutionary intent to internal power struggles of the individuals involved.  Theo and Kee, plus a midwife (Pam Ferris), narrowly escape The Fishes with the assistance of Theo’s elderly hippie friend Jasper (Michael Caine).  The plan is to rendezvous with The Human Project on their hospital boat via a refugee camp — what looks like a concentration camp for all intents and purposes.  Entering the refugee camp, full of “fugees”, the film depicts immanently contemporary horrors, with hooded prisoners subjected to torture, humiliation and execution. The scenes recall Abu Ghraib.  On the way there, scenery of belching pollution coming out of drain pipes and foul gasses emanating from smokestacks implies total environmental collapse as a possible cause for the infertility problem.  Inside the camp, Kee has her baby — will she name it Frolle or Bazooka? — and an insurrection breaks out between The Fishes and government troops.  Brutally realistic scenes of urban combat follow.  Theo and Kee try to reach a rowboat hidden in the camp.  They have the assistance of a surprisingly benevolent ersatz hotel operator who doesn’t speak their language.

No doubt, the film has leftist leanings.  The struggle for power in “civil society” creates conflict, while in the primitive setting of the refugee camp, there are benevolent humans.  This could almost come from something Jean-Jacques Rousseau wrote during the Enlightenment.  But the quest to reach The Human Project seems like a step towards something else, something not quite of the Enlightenment.  Going to a colony somewhere out in the sea seems like a rootless new beginning.  The centrality of “fugees” — Kee is one — seems like a rejection of “identity politics” and an assertion that the future–the Human Project’s boat is called “Tomorrow” — must reject a retrenchment of uniformity, exemplified by the fascist English government’s use of concentration camps, and float about on something much looser, something that permits radically disparate elements to coexist.  The common denominators are care for others, generosity, self-sacrifice.  The film is a curiously uplifting message in a world that seems hopelessly and intractably locked into a downward spiral.  What superficially seems like a dumb sci-fi thriller is actually quite an excellent movie, made all the better by uniformly superb acting and the highest technical proficiency.  Hollywood is capable of something good now and again.