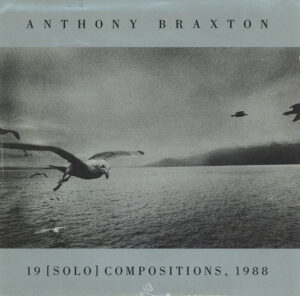 Some of Braxton’s 1980s albums, especially those recorded in the studio, have a cold, clinical and sterile feel characteristic of the era.  Looking back, recording techniques common in that time period often detracted from his music.  This album, recorded live at concerts in two cites over the span of roughly a week collects solo performances.  The recordings are raw and unaffected by studio effects or modifications — so raw that you often can noticeably hear Braxton taking breaths breaths as he plays.  What you end up with is a collection of songs from Braxton’s past career, plus some standards, all performed with intensity and fervor, and free of anything standing between the listener and the performance.  Looking at the songs present, this is an album that, in some ways, offers a kind of summary of some of his interests to date.  As solo saxophone performances, there is only a single line to follow, making this feel like a less demanding listen, even though Braxton holds back nothing from the performances.  Though some find this a bit cold, I don’t.  Though there is a quality a bit like hearing a talented street busker in some ways.  There are many solo recordings scattered throughout Braxton’s catalog and many are are quite rewarding, some even more than this one.