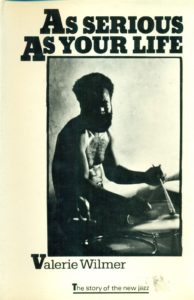 Valerie Wilmer – As Serious As Your Life: The Story of the New Jazz (Allison and Busby 1977)

Val Wilmer is a journalist who photographed and wrote about the “new jazz” also known as “free jazz”, etc.  Her 1977 book As Serious As Your Life (revised and reprinted numerous times, with various alternate subtitles) remains one of the better-known histories of the musical movement.  Much of the book consists of chapter-length treatments of particular musicians, plus a few chapters on specific issues or theories.  The book captures the various attempts to forge and hold together a community of shared values mediated by this music.  While the biographical portraits sometimes verge on hagiography, the book as a whole benefits from well-researched quotes from performers themselves.  In fact, this book is an invaluable source of first-hand quotations from practitioners of this type of music during its heyday.  Figures like Bill Dixon, Clifford Thornton, and Rafael Garrett, for instance, offer extremely wise views on the music business and the practice of jazz.  And Wilmer deserves much credit for offering up a range of perspectives, often confused and contradictory, to allow readers to appreciate the multifaceted interests and objectives of those involved in the “new jazz” movement.

As the work of a journalist, though, this suffers from all the usual handicaps.  Among those is a certain theoretical weakness, drawing conclusions from unstated assumptions rather than providing any clear explanation of the analytical framework that led to those conclusions.  Well, at times it is perhaps less a weakness than a disingenuousness, what might be summed up as ideology masquerading as a critique of ideology.  Actually, as will be seen, As Serious As Your Life might be seen as an early example of so-called “left neoliberalism” that first emerged in the 1970s.

Every chapter, and practically every page, documents some form of resentment and envy (although it should be noted that not all the subjects interviewed exhibit these qualities). This doesn’t seem to be precisely Wilmer’s intent. But this emerges from the book nonetheless.

In a September 1971 interview, the composer Karlheinz Stockhausen remarked:

“If you achieve a certain independence in your work, you’re automatically attacked by all sides, last but not least by your own colleagues in the different countries.  It’s fairly difficult nowadays for composers in general, and in particular for younger composers, to get performances or teaching jobs.  And if someone like me has all his works regularly performed—very complicated works like Gruppen for three orchestras; Carré for four orchestras and choirs; or Mixtur, which requires a lot of electronic equipment, four sound engineers, another four persons playing the sine-wave generators, a lot of rehearsals—then there’s automatically a lot of jealousy.  And I can understand that feeling.  Then, there’s also another reaction coming from people who have a traditional musical education and are very much disturbed by what I do.”

Stockhausen uses the word “jealousy” here, but really he means “envy” in the sense of “resentment”.  He does posit a useful dichotomy of those who are quasi-reactionary partisans who substantively oppose innovations or change and those who nominally support a common project but instead raise objections based on envy or resentment.

Envy and resentment were pronounced factors in the “new jazz” movement, especially in relation to its limited commercial prospects.  Iain Anderson, in This Is Our Music: Free Jazz, the Sixties, and American Culture, noted:

“The narrowing audience for free improvisation illustrated experimental musicians’ growing difficulty in finding suitable venues and rewards consummate with their self-image as artists.  Many champions of free jazz began to view their lack of opportunity as a consequence of the music industry’s racial and economic structures, rather than the intrinsic value or resonance of their work.  These extra-musical developments soon interrupted and fractured the debate over modernist aesthetics, threatening the critical establishment’s prestige, credibility, and ability to mediate the position of jazz in American culture.”  (p. 75).

Wilmer is a “champion of free jazz” in this context.  Especially in her chapters that are topic-based essays not focused biography, she frames her narrative to bracket out these questions.  But Wilmer’s framing leaves her with little to support the idealized objectives of many free jazz practitioners (as quoted by Wilmer).  This shades into an endorsement of the “myth of meritocracy” that holds that all meritorious action should be (but isn’t) rewarded commensurately — and is an attempt to demystify the absence of a meritocracy.

To be more precise, Wilmer basically adopts the ideological position articulated by philosopher John Rawls, probably the leading 20th century philosopher of political liberalism.  Rawls insisted that envy and resentment were not intrinsic to the human condition, but were the byproduct of unjustifiable inequality.  But Rawls’ position has been criticized by the likes of Jean-Pierre Dupuy in an interesting and relevant way.  Dupuy insists that there are symbolic procedures (hierarchy itself, demystification, contingency, and complexity) that make acceptance of unequal social conditions tolerable, that is, that give the appearance of critique but really form a protective buffer around individuals to allow hierarchy to function instead of being an actual challenge to it at its foundations.

The role of envy is pronounced in the politics of the far right wing.  Recall former 2012 U.S. presidential candidate Mitt Romney’s plea to avoid the “bitter politics of envy” — Romney of course espousing this to suggest that the poor should accept their lower social status without objection.  Another prime example is novelist Ayn Rand‘s work.  Her pseudo-philosophical concept of “objectivism” is nothing more than the allowance of some people to assert their self-perception/self-identification as “fact” that must be accepted and acted upon by others (while dodging the question of which people get to do this and which don’t, and why).  Unlike the far right, who seek to maintain and promote inequality but eliminate objections to it, centrist liberals tend to assume that envy and resentment would go away in a “just” society (contrary to the view of psychoanalysis, which posits that envy is part of human psychology and therefore would not go away).  The problem here is that the dubious assumptions of Rawlsian liberals cause them to fail to meaningfully distance themselves from odious monsters like Rand.  At bottom both simply try to “wish” away envy and resentment.  As a result, the centrist liberals simply draw a line of exclusion in their hierarchy slightly differently than the right-wing reactionaries — but they still draw those lines and show no sign of trying to eliminate them in the future either.  We end up with merely a slightly different “management” of the collective feelings of guilt over the differences between particular groups.  In this way, the sentiments of black nationalism espoused in this book are often not so far off from the right-wing populism of, say, country musician Merle Haggard in the late 1960s and early 70s.  Rather than see black nationalism as merely one intermediate step in a larger effort, it is seen as an endpoint — despite the resentment-induced contradiction that if black nationalism is desirable then why not white nationalism, or, more humorously, this leads to the satirical song about male chauvinist resentment “What About Men?” from the TV show Portlandia.

Wilmer frequently frames the narrative of her book around a rather rigidly linear notion of (artistic) legitimacy.  (Following Dupuy, Wilmer here accepts hierarchy itself as an externally-imposed order independent of personal value).  She sees “free jazz” as unquestionably at the pinnacle of musical achievement and sophistication, at times indicating that it shares that position with Euro-classical music.  This leads, for instance, to complete derision of all forms of so-called jazz fusion, which merged rock with jazz, in ways that are often baffling.

Wilmer and some of her interviewees are right to point out that more marketing of the “free jazz” genre might have changed its prospects by creating demand and fostering a mere exposure effect, thereby leading to wider acceptance.  But those sorts of marketing decisions are basically political in nature.  Wilmer and some of her interviewees are hesitant to explicitly see them as such.  (Following Dupuy, there are numerous passages in Wilmer’s book that emphasize the contingency and complexity of the position of “free jazz” musicians as part of the accident of birth in an arbitrarily racist society with a complex and uncontrollable musical economy involving record labels, club owners, promoters, etc.).  All this reduces the “free jazz” movement to a kind of Ayn Rand-like universal (“just”?) capitalism, merely from an anti-racist entrepreneurial position.

So what is sorely lacking here is the recognition of something W.E.B. Du Bois famously wrote long ago:

“[A]ll Art is propaganda and ever must be, despite the wailing of the purists. I stand in utter shamelessness and say that whatever art I have for writing has been used always for propaganda for gaining the right of black folk to love and enjoy. I do not care a damn for any art that is not used for propaganda. But I do care when propaganda is confined to one side while the other is stripped and silent.”

“Criteria of Negro Art” (1926).  Wilmer and her interviewees frequently depoliticize their cultural interventions, and further tend to absolve many of the quoted speakers from having to reevaluate the self-serving and self-defeating aspects of their positions.  In this respect, Wilmer’s book takes a very different view than Carles and Comolli‘s Free Jazz / Black Power (1971), which saw the “free jazz” movement as intimately linked to militant black political action in decolonization and anti-capitalist movements.  Carles and Comolli, like Du Bois, viewed “free jazz” as unabashedly partisan, though Wilmer recounts and indeed promotes a concealment of that partisanship that is ultimately unconvincing and, frankly, often deceptive. As Frantz Fanon wrote in Black Skin, White Masks:

“I as a man of color do not have the right to seek to know in what respect my race is superior or inferior to another race.

“I as a man of color do not have the right to hope that in the white man there will be a crystallization of guilt toward the past of my race.

“I as a man of color do not have the right to seek ways of stamping down the pride of my former master.

“I have neither the right nor the duty to claim reparation for the domestication of my ancestors.

“There is no Negro mission; there is no white burden.

“I find myself suddenly in the world and I recognize that I have one right alone: That of demanding human behavior from the other.

“One duty alone: That of not renouncing my freedom through my choices.

“I have no wish to be the victim of the Fraud of a black world.

“My life should not be devoted to drawing up the balance sheet of Negro values.”

Wilmer is obviously writing from a very different perspective than Fanon.  But in this way, in hindsight at least, it can be seen how the free jazz movement fizzled and ultimately failed, by becoming an accomplice to the system it ostensibly fought against and surrendering the revolutionary premises that gave rise to it in the first instance — Anderson’s This Is Our Music is a very even-handed treatment of that transition.

As Serious As Your Life remains an invaluable resource and a book that anyone researching the “free jazz” genre will need to consult.  But, at the same time, readers should consider other relevant scholarship that throws the ideology of Wilmer’s book, and of the musicians she interviewed, into relief.