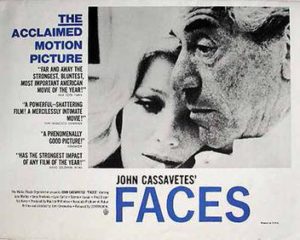 Johan Cassavetes’ Faces was his second independent production as a director.  It is widely regarded as one of the most important American independent films.  The film is a drama.  Significantly, though, it is drama rather than melodrama.  Theodor Adorno advanced a theory of the “Culture Industry”, which posited that standardized cultural goods — like formulaic Hollywood melodramas — encourage passivity and docility among the masses.  It is immediately apparent that Faces is no mass produced, formulaic Hollywood melodrama!  As one review succinctly put it, “Cassavetes’ gritty black and white drama analyzes the inevitable harshness of relationships (routine, jealousy, infidelity) through a rigid attention to complex emotions rarely seen in movies.” (Though one could question that review’s categorization of infidelity as “inevitable”).

The film centers around the marriage of Richard “Dickie” Forst (Marley) and Maria Forst (Carlin).  Richard is an upper middle class corporate film executive — whose job seems to relate to financing in some way — entering late middle age, who has a posh suburban home, a predilection for boozing, and a womanizing “old boys club” male chauvinist attitude.  The film opens with him at work, briefly, before he visits the home of a prostitute Jeannie Rapp (Rowlands) with his old friend Freddie (Fred Draper), where they carouse and make crudely cynical jokes.  Maria Forst is introduced later in the film.  She does not work, and the couple has no children.  Her husband callously announces he wants to divorce after she refuses sex — with intended cruelty he immediately calls up the prostitute Jeannie in front of Maria.  She goes out with friends to a nightclub and picks up a sort of hippie drifter Chet (Cassel).  Much of the film consists of long, intense dialog-driven scenes that construct character portraits less through demonstrative action and sequential scenes that build on each other than through a series of emotive, confessional yet somewhat isolated dialogues (though of course there is more than just dialogue).

The film is often interpreted as an expression of dissatisfaction with the “American Dream”.  And certainly there is something to that view.  Faces draws a bit on the same sort of bohemian critique of bourgeois society as, say, Allen Ginsberg‘s beat poem Howl from a little more than a decade prior.

Richard and Maria each want something more than they seem to have, even as, materially, they have all the possessions they could want, and Richard at least commands corporate power and prestige at his job.  In the film, though, the characters reach out to someone else, as if another person will provide a guarantee of meaning in their lives.  And yet the film is somewhat cramped in its ambitions, in that the characters seem to at most jump from one misguided set of desires to another — if they really make any jumps at all.

The overarching narrative of individuals breaking free of social bounds and constraints that is reflected by the dissolution of the protagonists’ marriage in some ways anticipates the demise of the American New Deal coalition, which gave way to the so-called neoliberal era.  Historian Jefferson Cowie‘s book Stayin’ Alive: The 1970s and the Last Days of the Working Class explored aspects of the phenomenon of individualism reflected in mass culture, drawing from the thesis of Christopher Lasch‘s famous book The Culture of Narcissism.  Are the Forsts really striving for no more than hedonistic narcissism?  As captured in Michelangelo Antonioni‘s splendid commercial flop Zabriskie Point, was this hedonistic narcissism also the basic problem in what the so-called “New Left” of the late 1960s aimed for?

The Slovenian philosopher Slavoj Žižek has explained how the post-modern ethical injunction (of the superego) is to “enjoy!”  The message that people in American society are constantly bombarded with is the command to enjoy themselves, and those same people are thereby induced to feel a loss if they do not experience enjoyment.  Žižek elaborates that the role of psychoanalysis is “to open up a space in which you are allowed not to enjoy.”  In this precise sense, the obstacle is to get rid of the injunction to enjoy rather than to merely shed inhibitions to more fully enjoy whatever consumptive, sexual, spiritual, or other activities people engage in.

The Forsts are kind of like heralds of the post-modern society.  In being affluent, they aren’t barred from enjoying themselves by material lack, because they can afford any amusement or living arrangement they wish.  In being white and having high social status, they also experience an almost complete social/legal permissiveness to do as they wish.  So, they are in this sense able to be considered true post-modern subjects.  When Richard Forst seeks a divorce, it is not that his character has any sort of awakening, really.  Rather, it is that his character experiences guilt by his failure to enjoy his lifestyle of power and consumption.  His impulsive demand for divorce is merely a way to double-down on his existing desires, and to try to remove what he sees (in the moment) as obstacles to those desires.  He simply wants to consume more — and his recourse to a prostitute is a classic example of sex-as-commodity consumerism.  Actually, the scenario in which Richard wishes to leave Maria (he seems to deem it an unserious request later in the film) is close to a classic one for psychoanalysts in which a married (chauvinist) man wishes to leave his wife for a mistress, only to then have his relationship with his mistress also fall apart because he misunderstood that his true desire to have a distant and obscure object (mistress as mistress) about whom to dream.

Maria’s situation is more complex than Richard’s.  She lives a life at home, spending time talking with other affluent housewife friends.  She resents her husband seeing her as merely there to serve (or service) him.  When she goes out with her friends and brings home Chet, she is, in a sense, making her own choices, perhaps for the first time, and we might pardon the way those actions appear hedonistic at first glance.  There is, though, a great scene with Chet at Maria’s house in which one of Maria’s older friends becomes indignant that Chet considers them dancing to be ridiculous, offended at the insinuation that she is too old for him.  Then perhaps the oldest of Maria’s friends takes this further, trying to make herself the object of Chet’s desire by dancing with him then tentatively asking if he will kiss her, before she breaks down crying and asks him to drive her home.  It is a moment of loneliness, the manifestation of social constraints of age and appearance, and an almost humiliating projection of desire.  Chet soon returns to Maria’s for the night.  This sort of undermines the aspect of Maria making her own choices — is the youthful Chet with her simply because she is the youngest of the women?  She eventually attempts suicide, which emphasizes the difficulty in her conceiving a new way of life.

Jeannie and Chet are the characters with the most emotional honesty.  Jeannie’s behavior, for her job, is self-evidently an act.  The depiction of a prostitute as the most authentic individual in a capitalist society fits quite squarely with many French films of the era.  Chet is a character without much depth, deployed often as merely a prompt for Maria’s character, but Cassel is wonderful in the otherwise flimsy role.

Although Faces is a groundbreaking film, it is also in some ways a less satisfying Cassavetes feature.  The two main characters for the most part begin and end the film as unsympathetic fools.  There are only dead ends and endless misery in their lives.  Cassavetes’ later films explored in greater detail interpersonal dynamics without the hedonistic baggage that Faces carries.  Those later films frequently explore with sympathy emotional bonds that are forged without regard for “happiness” as such.  A possible explanation for this is a sort of “sour grapes” autobiographical one: Cassavates vindictively made a film about the shitty, miserable life of a film executive (and his wife) after he was run through the Hollywood meat grinder by such film executives when trying to work there as a director in the early 60s.  And yet, such a view overlooks how this might have just been a coping mechanism for Cassavetes, whose real-life personal aspirations, and sometimes his behavior, bore resemblances to features of his Richard Forst character.  So the ultimate limit of the film is that it gets caught in cynicism and ressentiment that hates what is all around it without quite taking responsibility for its own position within its society and how its desires are conceived as part of that very society.  Though these limitations are minor in what is still an impressive cinematic achievement.

It would be good to pair a viewing of Faces with a self-consciously psychoanalytic film by Fellini or Jodorowsky like 8 1/2 or El Topo, or, perhaps more pointedly, Frankenheimer‘s Seconds, which metaphorically (and with a sci-fi twist) depicts the difficulty in trying to change one’s desire.  Another good juxtaposition is Aldrich‘s The Big Knife, which is tied directly to the Hollywood film industry milieu albeit with more conventionally theatrical storytelling and presentation.