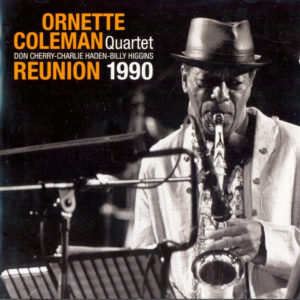 Recorded at an appearance in Italy in 1990 of the “reunited” Ornette Coleman Quartet, this bootleg has a number of things going for it in spite of the expected lo-fidelity sound.  For one, there are some original songs present that do not appear on any official albums, and this bootleg comes from period of years without any official recordings.  Second, some of the performances are quite good.  The first disc is relatively strong, though the second disc doesn’t really maintain the same level of performance.

Charlie Haden plays like a motherfucker here — this is one of his strongest recordings of the era.  Billy Higgins also turns in an above-average performance that surpasses any of his studio turns in Ornette’s band.  Ornette plays well as usual, though there is nothing particularly remarkable about his performance here.  On the other hand, Don Cherry turns in a substandard effort, and he more often detracts from the songs than contributes to them.

This bootleg is naturally only for Ornette fanatics.  But there are a enough highlights to recommend this to those fanatics.