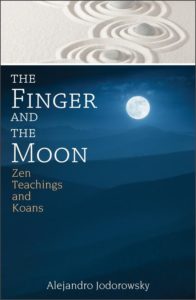 In this book, filmmaker/poet/mime/comics author/etc. Alejandro Jodorowsky (Jodo) explores zen buddhism from a perspective heavily influenced by psychoanalysis.  He had met rinzai zen monk Ejo Takata in Mexico City long ago.  The historical background of how Jodo met Takata (and various other spiritual gurus, shamans and folk healers) is found in his other book The Spiritual Journey of Alejandro Jodorowsky: The Creator of El Topo [El Maestro y Las Magas].  The Finger and the Moon reproduces traditional zen koans and some haiku, and then follows them with analysis.  Much of the analysis appears to be derived from — or at least heavily informed by — other published sources of “traditional” answers/interpretations.  Zen purists of course howl about how it is anti-zen to offer intellectual analyses of zen koans and such.  Humbug.  To me, the great value of this book is precisely that it steps outside of what zen (and its adherents) argues for itself (i.e., from a self-interested perspective), and tries to introduce some outside perspective.  Of course, Jodo is absolutely a proponent of zen teachings.  But he is willing to contemplate other ways of knowledge.

There are two points that, for me, help put zen buddhism into context:  social constructs and beautiful soul syndrome.

But is it really a good thing that people reject social constructs entirely and permanently?  Put another way, if social constructs are totally rejected, are there still problematic “objective facts” and/or “purely subjective” things?  First some examples from popular culture.

In a season eight (2018) episode of the TV show Portlandia, there is a comedy sketch in which a woman living in an apartment building has concerns about a neighbor across the hall.  She hears loud noises, and suspects foul play.  But the neighbor smiles and assures her everything is fine.  Then one day, her suspicions are confirmed.  The police arrive to arrest the neighbor.  He is a serial killer.  But the neighbor smiles and explains to the police that he is just being true to himself.  So the police shrug and leave him be (advising the woman that she should probably move)!  The point here is, of course, that individual subjective perspectives cannot be given free reign in any sort of society anyone would want to live in (and society does exist, contrary to what Margaret Thatcher has said).

Another example is the film Spring, Summer, Autumn, Winter … and Spring, in which a main character is a buddhist monk.  A commentary on the film by philosopher Slavoj Žižek explains how the categories of “social constructs” and “purely subjective” things are related (reflexive):

“In his Phenomenology of Spirit, Hegel wrote that evil resides in the very gaze that perceives evil all around itself. Does Kim Ki-duk’s film not provide a perfect case of this insight? Evil is not just man’s possessive lust; evil is also the very detached gaze of the monk, which perceives possessive lust as evil. This is what, in philosophy, we call reflexivity: the standpoint from which we condemn a state of things can be itself part of this state of things.”

This ties in somewhat with the problems that some zen monasteries have with sexual abuse and the like.  And it is a bit like the Portlandia sketch:  it is possible — and necessary — to put a larger box around individual subjective thoughts and feelings, because they are reflexive and partly socially determined.

Taking the Hegelian critique of zen further, again drawing from Phenomenology of Spirit, we arrive at the concept of the “beautiful soul syndrome”.  It is a problem of certain people claiming to stand apart from evil, as a strategy for asserting a particular kind of social standing.  Žižek explains it this way:

“They play the Beautiful Soul, which feels superior to the corrupted world while secretly participating in it: they need this corrupted world as the only terrain where they can exert their moral superiority.”

But Jodo’s book offers excellent explanations of how “true” enlightenment goes beyond this.  Instead, he says, “When the self ceases to exist, the world exists.”  This is more like psychoanalysis, which is mostly about coming to terms with one’s own mortality.  I don’t think he means that in a literal or nihilistic way, but as a recognition of the arbitrariness of pure subjectivity — this is elaborated in his other book The Dance of Reality: A Psychomagical Autobiography.  So he writes extensively here about how people should accept their circumstances and avoid seeking power and superiority.  He also candidly suggests that he has not reached enlightenment, and questions whether anyone really has.  He makes no claim to being a “beautiful soul” standing apart from the corrupted world, but acknowledges his part in an imperfect reality.

Though, on the other hand, Jodo rejects certain tenets of psychoanalysis too.  Jodo goes on and on about happiness, though psychoanalysis rejects this.

“In our daily lives, we (pretend to) desire things which we do not really desire, so that, ultimately, the worst thing that can happen is for us to get what we officially desire. Happiness is thus inherently hypocritical: it is the happiness of dreaming about things we really do not want.”

The larger point here, which is not very well drawn in Jodo’s book, is that detachment from social constructs is never permanent.  But attempts at detachment, and perhaps temporary detachment, allow both the individual recognition of attachments to social constructs and — most importantly — a choice of attachments to social constructs.  Such choice is not always (or even usually) a happy one.  It is difficult.  In zen, the tendency is to detach from certain social constructs while bracketing out others from the field of view, leaving them in place but immunized from scrutiny.  Moreover, in “A Definition of Zen,” a master repeats the same definition as the disciple, but it is different because the master is “enlightened” while the disciple is not.  It is interesting to look at this from the standpoint of sociology.  In the book Language & Symbolic Power,  Pierre Bourdieu discusses the hypothetical christening of a new ship, in which a town mayor was to read a speech and break a bottle of champagne on the ship’s hull.  What if, before the planned event, a random person sneaks up and reads script for the mayor’s speech and breaks the champagne bottle on the ship’s hull?  Is the ship christened, or does the other person lack the symbolic authority to do so?  What does “enlightenment” mean from this perspective?  Is it just a social position of symbolic power? One that zen “masters” seek to immunize from scrutiny?  Some of this might also be critiqued from the standpoint of Fredric Jameson‘s notion of the “vanishing mediator”, with the sort of real, authentic master being one who disappears.

Injecting the perspective of psychoanalysis (or sociology, or whatever) helps to bring back into view the disavowed social constructs on which zen practice relies.  Even if Jodo stops short of drawing all these conclusions, his book suggests asking these sorts of questions and offers meaningful attempts to problematize the tacit assumptions of zen practice.  For instance, for one of the last koans in the book, “Tchau-Tcheu Tests an Old Woman,” he explains how even zen “masters” were male chauvinists who offered sexist “teachings” while supposedly “enlightened”.

The discourse of the master supposedly declined over the 20th Century. Jodo seeks a revival, but in a reformulated way.  In fact, as a “guide” to leadership, this book probably belongs up there with stuff like F.G. Bailey‘s Humbuggery and Manipulation: The Art of Leadership, a good biography of Lenin (plus his writings), and Thucydides‘ History of the Peloponnesian War.  This book does a lot to highlight unusual techniques and the limits of some leadership styles — if one reads closely and between the lines, that is.  Its strength in that regard is that it is not trying to be a book on leadership!

Anyone demanding a purist zen book will be disappointed (though, of course, such expectations are anti-zen).  But readers seeking to uncover wisdom for themselves may find some valuable tools and assistance here.