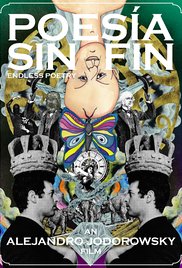 This is the best new(-ish) film I can remember seeing, a fact bolstered by watching the horrendous Star Wars: The Last Jedi at a second-run theater shortly after it.  This autobiographical work draws from the second part of The Dance of Reality: A Psychomagical Autobiography (2001), and chronologically follows Alejandro Jodorowsky’s previous film La danza de la realidad [The Dance of Reality] (2013), which also drew from his autobiography.  This is not a conventional, “accurate” or “realistic” autobiographical picture.  Some scenes are altered from their historical sources, and most of the film represents stylized exaggerations of real-life events for artistic effect.  While this can definitely be called Felliniesque — Amarcord, Satyricon and 8 1/2 being perhaps the closest counterparts — everything here is unique to Jodo and nothing can really be said to be copied from Fellini or anyone else.  Jodo’s predilection for combining psychoanalysis and shamanism completely and irrevocably marks his own style.  But perhaps it suffices to say this is about as good as Fellini at his best.

The film opens with Jodorowsky in his teens, still living in Tocopilla, Chile.  Jeremias Herskovits reprises his role as the young Jodo.  But his family relocates to Santiago.  He develops a love of poetry.  Eventually he runs away from home and is taken in by kindred spirits at a kind of artist commune.  There he works on his poetry and begins making puppets for a puppet show he presents with a friend.  He cultivates relationships with local poets and spends time in bars recreated here with surreal decor.  He then is given a loft apartment, by chance, where he comes into himself as a young adult.  A particularly moving scene is the very end of the film.  This is where Jodorowsky decides to leave Chile for France.  His father meets him at the port as he is leaving.  In real life, he never saw his father or other family members again.  But here, as a kind of narrator, he steps in to ask his younger self to forgive his father and insist on a different interaction with the father character.  The film is historical, but also a dialog with the director’s own past, as a kind of quest to confront and overcome his own mistakes.  Numerous scenes depart from the way Jodo described them in his earlier book The Dance of Reality.  While sometimes that means the filmic depiction is exaggerated, in some instances things are toned down to be more presentable on screen.

One recurring effect is the presence of stage hands dressed entirely in black, including gloves and full-head hoods.  These stage hands take things from the actors’ hands and hand them other things.  Familiar in theater productions, here the effect is to consciously direct the audience to the symbolic significance of characters’ actions on screen and to heighten emphasis on the characters’ emotional states.  Another device used repeatedly is the active unveiling and movement of life-size black-and-white posters of buildings and a train.  These convey the past in a kind of distant echo, real yet unreal.  They allude to the past while recognizing that events can’t be fully re-created, only conjured up from vague memories from a new perspective.  Then the end of the film features a crowd, half dressed in skeleton costumes and half dressed in red devil costumes.  The skeletons appear elsewhere in the film too.  These images are striking and indelible.

Jodorowsky’s wife Pascale Montandon-Jodorowsky provides lighting, color and costume contributions.  All of these aspects are particularly striking and effective.  His son Aden plays his teenage self, and his oldest son Brontis reprises his role as his father.  Pamaela Flores reprises her role as his mother, again singing all her lines in an operatic style, but she also portrays the poet Stella Díaz Varín, Jodo’s first girlfriend.

This is a somewhat smaller-budget film.  Moviemaking is an industrial art, demanding substantial funds.  It is simply not possible to realize certain things without money.  Jodorowsky is quite open about his outsider status as a filmmaker, and his acceptance that his quest to make art for art’s sake places him squarely in opposition to the profit-focused Hollywood machine.  He ran out of funds mid-way through filming Endless Poetry, and raised the remaining funds through a “crowdfunding” campaign.  While there is the potential to see his efforts as self-aggrandizing, taking Jodo’s mysticism — drawn from zen buddhism, the tarot, and elsewhere — at face value, he doesn’t hesitate to work on his own personal “inner” growth, or to use himself as an example — good or bad — for others.  This attests to some sort of more noble purpose.  Returning to the Last Jedi comparison, this film presents a much more worthwhile exploration of a master/apprentice framework, particularly in the way Jodo appears directly as a kind of narrator.  The Last Jedi is sub-moronic in that respect, when you get down its anti-zen “striving” narrative.  These elements become even more pronounced in later parts of Jodo’s real life.

Jodo is still only part way through film adaptations of the book The Dance of Reality, and that isn’t even counting his other memoirs about episodes of his adult life like The Spiritual Journey of Alejandro Jodorowsky.  Supposedly he plans a five film cycle, of which this is the second.  Though it does seem that the third installment is underway in some form.

Being more about Jodo’s inner struggles to “become himself” when he a teenager, rather than being about his father, makes this just a bit more interesting than its predecessor The Dance of Reality.  The visuals are also more extravagant and memorable here.  This is why movies are made!