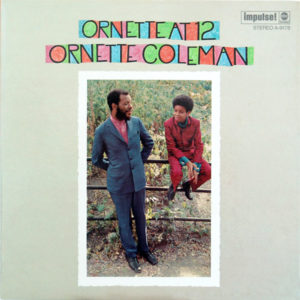 Ornette’s first of two albums — both recorded live — for the Impulse! label.  The band is Ornette, Charlie Haden, Dewey Redman, and Denardo Ornette Coleman (Ornette’s son).  Denardo was 12 years old at the time, hence the title of the album.  Much has been said and written about Denardo’s presence — nepotism? a reliance on the fact that he was too young to have learned “conventional” jazz drumming?  The perfect fit?  Here, he does manage to contribute some things, though I wouldn’t say he is able to sustain a level of meaningful contribution over the entire performance.  The opener “C.O.D.” (whatever that acronym stands for!) is the highlight, with some great interplay between the two sax players, but “New York” is strong too, with a long section for Haden to stretch out while Denardo holds back.  The rest (“Rainbows,” “Bells and Chimes”) is not especially memorable, with Ornette playing trumpet and violin less successfully than elsewhere.  Lots of this is in the style of Ornette’s albums for Blue Note (New York Is Now!, Love Call), recorded earlier the same year, though a bit better thanks to the presence of a more sympathetic rhythm section.  So, on the whole this is decent if still a bit uneven.  The next Impulse! album Crisis is stronger.  For what it is worth, Impulse! marketed this as a studio album, though it is in fact a live recording with audible noise from the audience.