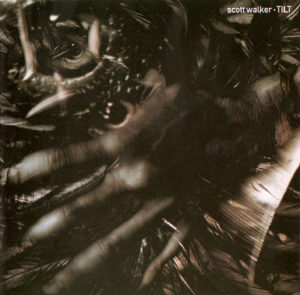 Scott Walker’s later career has been enigmatic, to say the least.  He got his start singing light pop, and ended up in one of the first successful UK “boy band” rock acts, The Walker Brothers.  But friction over Scott’s obviously superior vocal abilities led to the band splitting up after just a few years.  His solo career burned brightly at first, but his finest work just didn’t meet with enough commercial success, and he drifted into country-pop terrain for a time, then reunited with The Walker Brothers.  Something unusual happened on the group’s post-reunion Nite Flights album, though.  Walker unveiled new, dark, menacing and genre-defying compositions like “The Electrician” and “Fat Mama Kick.”  He released one solo album, Climate of Hunter, in the early 1980s, but, despite an aborted effort with Daniel Lanois and Brian Eno, nothing further that decade.  By the early 1990s, he had started writing numerous new songs for a new album project finally released in 1995, Tilt.  Commenting on this paucity of output, he said, “I’ve become the Orson Welles of the record industry. People want to take me to lunch, but nobody wants to finance the picture.”

While some of Walker’s earlier works hint at the general contours of Tilt, the album is unique in a way few albums are.  Walker takes pop/rock song structures, strips away some of the most typical features of “rock” music, like a syncopated beat, then adds in industrial noises, obscure orchestration and quasi-operatic singing.  This was partly about taking elements of “high” and “low” culture that don’t typically appear together, and coming up with a hybrid that finds its feet not in fully synthesizing the disparate elements, but holding them in a kind of part synthesis and part oppositional juxtaposition.  This naturally leans toward the counterculture, in that pure “highbrow” arts admit nothing from outside their exclusive remit, save for the occasional “exoticism” or a tactical renormalization of an outside threat.  There are some musical precedents for this kind of approach in the most general sense, namely Nico‘s striking The Marble Index, which took gothic Euro-classical music and merged it with urban folk.  But Walker’s precise musical coordinates are different, and lean on obscure yet decidedly non-mainstream politics — they are overt, yet oblique enough to avoid easy identification with precise political currents.  He also developed a penchant for making his listeners stop and ask, “What?” are least once or twice per album.

If there is any great, lasting achievement here, it is that Walker reconfigures the relationship between singing and musical accompaniment in nominally pop/rock music.  The lyrics are non-linear, often cycling and vamping on brief phrases and sounds that mutate slowly, and they convey almost cinematic scenes, the contours of which are only hinted at.  His goal, he stated in an interview is for his singing to be “not too emotional and not too deadpan.”  The sonic accompaniment adds mood, and moves almost in loose parallel with the vocals, never really seeming like an integral part of the vocals in a harmonic or melodic sense, but linked to the lyrics to expand upon their meaning.  The result is something uncommonly dense.

The opener, “Farmer in the City: Remembering Pasolini” is dedicated to the late Italian filmmaker and poet Pier Paolo Pasolini.  The next song, “The Cockfighter,” includes bits of text lifted from the transcripts of the trials of Queen Caroline in 1820 (in English Parliament) and Nazi administrator Adolph Eichmann in 1961 (in Israel).  One was about a bill of attainder, a legislative act declaring a particularly person guilty of some crime and punishing them that took on the characteristics of a legislative “trial”, and the other an ex post facto trial, criminalizing conduct after it was conducted.  What commonalities these trials share is murky in Walker’s invocation, though both were constitutionally banned in the United States.  And how cockfighting relates to those trials is anyone’s guess, though it is a gruesome “sport” banned almost everywhere—it is also the title of a 1974 Monte Hellman film.  “Bolivia ’95” deals with the South American country that grew turbulent when national industries were being privatized.  Walker called the title track a “black Country music song.”  What do all these disparate things mean pulled together on one album?  What exactly.  It represents the new opacity and mystification of daily life under modernity.  There is a part of all this a bit like Thomas Pynchon‘s novel Gravity’s Rainbow, or Goethe‘s Wilhelm Meister’s Journeyman Years, or The Renunciants, in which the very diffuseness and difficulty of piecing together meaning is itself the focus.

In an interview more than a decade after the release of Tilt, promoting his next album, Walker said, “Essentially, I’m really trying to find a way to talk about the things that cannot be spoken of. I cannot fake that or take short cuts. There is an absurdity there, too, of course, and I hope that people pick up on that. Without the humour, it would just be heavy and boring. I hope people get that. If you’re not connecting with the absurdity, you shouldn’t be there.”  He cites Kafka as an influence, who used to laugh when reading his writing to friends.

“Bouncer See Bouncer…” introduces a device he would revisit on later albums (as with a bell on “Herod 2014” from Soused).  A repeating sound, not made by a conventional musical instrument, but sounding like a broken metal hinge banging together, chimes throughout the song.  It continues largely independent of everything else happening in the song.

Tilt has held up as one of Walker’s finest full-length albums.  It doesn’t make for casual listening, exactly.  But there is a mocking sarcasm beneath the dark and morbid exterior of these songs.  Tilt remains something rarely imitated, excepting perhaps Walker’s later albums.