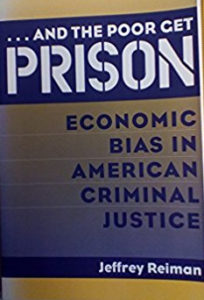 Jeffrey Reiman – …And the Poor Get Prison: Economic Bias in American Criminal Justice (Allyn and Bacon, 1996)

Jeffrey Reiman’s …And the Poor Get Prison: Economic Bias in American Criminal Justice is a 1996 edition of a book first published in 1979 and republished in revised editions through the eleventh edition in 2016 (most under the title The Rich Get Richer and the Poor Get Prison: Ideology, Class, and Criminal Justice).  Paul Leighton became a co-author on later editions.  The book is intended primarily for use as a textbook for college-level criminal justice coursework.  But it remains readable for general audiences as well.  This review addresses an edition now over twenty years old, and does not compare either newer or older editions.

In short, this book presents an outstanding critique of the ideology behind American criminal justice, concluding that the system and its institutions are biased against the poor.  What is most commendable about the book is that it is structured in a logical and coherent way, it provides citations and evidence for every one of its arguments, and it responds to typical counter-arguments.  In other words, rather than a polemic that simply asserts its thesis without testing it, or attempting to side-step normative moral and political judgments by hiding behind technocratic language (so-called “university discourse”), the book attempts to ground and defend its positions in an explicitly materialist way.  While it would be fair to say that not every individual argument in the book is well-taken, be it due to outdated or incomplete statistical information or something else, the overwhelming majority of what is presented is supported by both coherent theory and some type of empirical data.

The normative positions taken by Reiman are ultimately defended on moral terms, rather than on a “mistaken facts” basis.  In other words, he does not fall back on the weak justification that things would change if only people knew what the facts really were.  The saying from the total quality improvement discipline, that every system is perfectly designed for the results it currently achieves, fits perfectly into Reiman’s analysis, as does Machiavelli‘s observation that the law is merely the means by which the strong oppress the weak.  Indeed, he mentions teaching a class in which he asked his students a question: how would they design a criminal justice system so that it “would maintain and encourage a stable and visible ‘class’ of criminals.”  The students indicated that it would look pretty much like the current American criminal justice system.

As Alex S. Vitale writes in a more recent book, The End of Policing, “Powerful political forces benefit from abusive, aggressive, and invasive policing, and they are not going to be won over or driven from power by technical arguments or heartfelt appeals to do the right thing.”  Reiman recognizes this too.  In this edition of his book, he alludes to this problem.  His goal is not to outline a specific political problem merely to justify addressing it in a particular predetermined way, but rather to detail the set of interrelated problems that justify a significant political intervention of some sort, the particulars of which are not fully determined.

Reiman establishes a few points that should, now at least, be considered incontrovertible:

“1. Society fails to protect people from the crimes they fear by refusing to alleviate the poverty that breeds them . . .

“2. The criminal justice system fails to protect people from the most serious dangers by failing to define the dangerous acts of those who are well off as crimes . . . and by failing to enforce the law vigorously against the well-to-do when they commit acts that are defined as crimes . . .

“3. By virtue of these and other failures, the criminal justice system succeeds in creating the image that crime is almost exclusively the work of the poor, an image that serves the interests of the powerful . . . .”

Reiman’s overarching explanation for all this is something he call a “Pyrrhic Defeat” theory, a kind of feigned loss to achieve unstated or disavowed aims, which is something vaguely akin to the plot of the Cold War spy movie Enigma in which a spy is set up to be caught in order to conceal the true aims of his agency handlers.  In the details, Reiman admirably explains how bias in upstream aspects of criminal justice are more damaging than downstream ones.  For instance, legislation that exempts the actions of the rich from the definition of “crime” means that the rich never enter the criminal justice system in the first place, and sentencing fairness is therefore irrelevant to them.  While bias in downstream events like sentencing do matter, by that stage most of the rich have been filtered out of the system.  A key point here is prosecutorial discretion.  Reiman notes how it remains an opaque process still rife with opportunities for bias that have been restricted in other areas.

There are a few flaws in this edition.  For instance, Reiman argues that his “Pyrrhic Defeat” theory is not a “conspiracy theory”.  But this is somewhat a strawman argument, with Reiman applying an unduly narrow criminal law definition of “conspiracy”.  It also overlooks a similar sort of middle-ground position like the “propaganda model” of mass media put forward by Edward S. Herman and Noam Chomsky, which emphasizes the reinforcement and reproduction of an ideological system while also suggesting causal intent, or the psychoanalytic concept of denial/disavowal/Verleugnung, in which denying something that affects an individual is actually a way of affirming what he or she is apparently denying.  Indeed, Reiman’s focus on the criminal justice system as such means he only discusses mass media complicity in passing, which seems like too little treatment — doesn’t the mass media play a key role influencing what “crimes” people fear?  Additionally, Reiman makes a conservative argument about gun control that is contrary to his other arguments (i.e., is non-materialist), and counterfactual.  More recent evidence suggests that banning firearms will not reduce murder or suicide, directly contradicting Reiman’s claims.  And lastly, Reiman concludes the book with some suggestions to make the criminal justice system minimally morally defensible.  What is interesting here is that Reiman abandons the materialistic critique that grounded the entire book to that point and instead justifies his policy recommendations based on an entirely different foundation, namely that of center-left liberalism.  He cites the likes of John Rawls and John Stuart Mill.  While Reiman applies this approach because he seeks only to suggest the minimum necessary moral reforms, not the best possible reforms, his abrupt abandonment of a materialist philosophy renders the basis for these suggestions incompatible with his overall critique rather than the good faith political compromise he intends it to be.  With the exception of the “gun control” position, which is not defensible, everything else is sort of unobjectionable, even if it comes across as kind of arbitrary as presented.

On the whole, this is a wonderful book.  It makes an essential introduction to the operation of the American criminal justice system, and provides a durable critique of its most fundamental moral flaws.