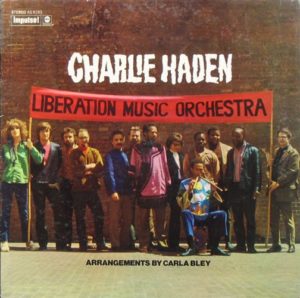 Made as a kind of tribute to the Republican (anti-fascist) side of the Spanish Civil War, Liberation Music Orchestra is political music in the same spirit as Paul Robeson‘s Songs of Free Men or the poetry of Pablo Neruda, like España en el corazón [Spain in Our Hearts] (1938) — even if Haden sticks mostly to a tone of determined hopefulness rather than the harrowing sadness of, say, Neruda’s devastating “I’m Explaining a Few Things.”  The music itself falls on the line between folk-inspired composition and free jazz — reference points are The Jazz Composer’s Orchestra, and, of course, efforts by orchestra members like Don Cherry‘s Symphony for Improvisers, Carla Bley‘s Escalator Over the Hill, and Gato Barbieri‘s “Chapter” albums.  Bley provides arrangements.

Some of this constitutes dissonant free-form improvisation.  Frankly, though, this hardly represents the finest efforts along those lines from this talented group of performers.  It is actually the composed songs with arrangements by Bley that impress the most.  There is always a looseness and warmth, with many of the group passages having a Salvation Army band quality (like Dylan‘s “Rainy Day Women #12 & 35”).  The use of “sampled” pre-recorded vocals and flamenco-style acoustic guitar are rather unique aspects of this music.

There is a reading of Hanns Eisler and Bertolt Brecht‘s “Einheitsfrontlied [Song of the United Front],” without Brecht’s lyrics.  Eisler was a student of Arnold Schönberg, but turned to popular music.  He and Brecht were German communists who wrote the song 1934 at the request of Erwin Piscator, to be used to rally the political left to fight back against Hitler and the Nazis.  The song later became associated with the Spanish Republicans.

The album is about more than just the Spanish Civil War.  Haden wrote “Song for Che” about the recently executed (as an injured, unarmed prisoner of war) Dr. Ernesto “Che” Guevara, whom Jean-Paul Sartre famously described as “not only an intellectual but also the most complete human being of our age.”  There is also a recording of Ornette Coleman‘s “War Orphans,” which fits the theme but is not specifically linked to the Spanish Civil War.

The Spanish Civil War was kind of a sensitive topic in the United States for a long time.  Americans volunteered to fight with the republicans, in what were called the Abraham Lincoln Brigades.  Composer Conlon Nancarrow was among them, but he later moved to Mexico because of domestic hostilities to Spanish Republican sympathizers.  Then there is the term “premature anti-fascist”, coined to demonize because the U.S. government and U.S. businesses tended to align themselves with fascists — though FDR later regretted his decision not to intervene on behalf of the Spanish Republicans.  But by the end of the 1960s, there was much hope that the tide was turning.  It never did, and prospects only grew dimmer in subsequent years.

“Circus ’68 ’69” is Haden’s own composition, inspired by an incident at the tumultuous 1968 Democratic National Convention, unfortunately typical of post-WWII Democratic Party politics.  As Haden described in the liner notes:

“After the minority plank on Vietnam was defeated in a vote taken on the convention floor, the California and New York delegations spontaneously began singing ‘We Shall Overcome’ in protest.  Unable to gain control of the floor, the rostrum instructed the convention orchestra to drown out the singing.  ‘You’re a Grand Old Flag’ and ‘Happy Days Are Here Again’ could then be heard trying to stifle ‘We Shall Overcome.’  To me, this told the story, in music, of what was happening in the country politically.”

Haden’s orchestra is split in two, somewhat like Charles Ives‘ Three Places in New England or Karlheinz Stockhausen‘s Gruppen & Carré, with each half operating separately from (and against) the other.  Though it says a lot about Haden’s own sympathies that “Circus ’68 ’69” is followed by a warm reading of “We Shall Overcome,” which concludes the album.

This is something very likable about Liberation Music Orchestra.  It serves its purpose of linking the political struggles of the late 1960s United States to the Spanish Civil War, and beyond.  Even if the freely improvised parts are less engaging, the best qualities of the music shine brightly through all the rest.  This is an album worth returning to often.