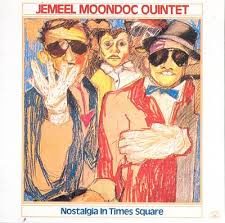 In the 1980s there was an unmistakable “conservative” trend in jazz.  At its worst, this involved musicians picking some arbitrary point in time and disregarding all of jazz history beyond that point (Amish-style).  But not all music of this nature was so reactionary.  David Murray‘s Ming is often cited as the foundational document for another approach, one that took elements of the past and built upon them without being beholden to them.  Another example would be James Newton‘s The African Flower (The Music of Duke Ellington and Billy Strayhorn), with a bit more restrained tone.  Jemeel Moondoc’s Nostalgia in Times Square fits into this continuum.  Moondoc was a veteran of Cecil Taylor‘s student bands in the 1970s, and had jumped over to New York City where he enmeshed himself in the loft jazz scene there.  He has a pretty clear tone and identifiable voice.  It’s lyrical and precise, with an undercurrent of ironic humor.  The whole album takes off from older jazz styles, kind of a swinging hard bop form, but adds to that more modern solos.  Each soloist is free to deploy unusual squeaks, intervals and harmonies, but the music generally is anchored in a more defined rhythm and flirts with a somewhat conventional melodic and harmonic base much more than the free music of the preceding two decades.  Moondoc has a great band.  Bassist William Parker would return to the same framework two decades later with albums like Sound Unity and Petit oiseau.  If this album has a flaw it’s that it occasionally feels a little rough around the edges, like the band could have used some more time to play together before recording, as sometimes soloists seem to clash in ways not fully intended.  But that’s a petty concern with what is generally a very good album.