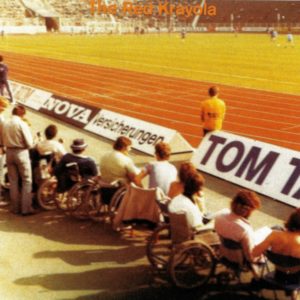 The Red Krayola re-formed in the mid-1990s.  Mayo Thompson was joined by a host of Chicago musicians, who were associated with groups like Gastr del Sol and Tortoise.  The first album by this particular version of the band, the eponymous The Red Krayola, turns out to be one of the most approachable albums of the band’s more than 50 year existence.  It draws from the “post-rock” and indie/college rock trends of the day without ever really being beholden to them.  The songs are short, but they are mostly real “songs” in the conventional sense — not always a given for this band.

This is certainly strange, left-field rock, but it might be the most listenable album with the band’s name on it.  That is due not just to the songwriting but also to the presence of overtly “rock” style drumming (by John McEntire) and plenty of guitar solos that would fit — only slightly awkwardly — on an alt/indie/grunge rock recording of the day.  This still maintains the warped humor the band has long been known for.  Take “I Knew It.”  The lyrics consist of the statement “I knew it” repeated over and over and over and over again.  The vocals seem electronically manipulated to eventually speed up and overlap — a bit like Steve Reich‘s epochal “Come Out.”  It is a fantastic combination of obsessive, ominous compulsive chanting and I-told-you-so snarkiness.

I was rooting for “Raspierre” — a song about Maximilien Robespierre (“The Incorruptable”), one of the Jacobin leaders of the French Revolution — which hearkens back to the prior decade’s Art & Language collaborations like Kangaroo? that used non-sequitur left-wing political sloganeering over music.  But it is more in line with Red Krayola’s early 1980s material, and would have been better replaced with “T (I, II)” from the following year’s tepid EP Amor and Language.  The next few songs “(“Stand-Up” and “Art-Dog”) are also among the weakest on the album.  These are, however, minor points overall.

If The Red Krayola resembles any of the band’s other recordings, it would have to be some of the punk/post-punk stuff from the late 1970s and early ’80s, like the EP Micro-Chips & Fish and the soundtrack single “Born in Flames.”  Which is to say that this has more tangible rock drive than many of their other recordings, which are far more abstract and conceptual.  Yet The Red Krayola is steeped in the sort of music that indie-rock and so-called post-rock groups were making contemporaneously.  So it has its own texture and feel.  This is one of my go-to Red Krayola albums, up there in the top tier somewhere.