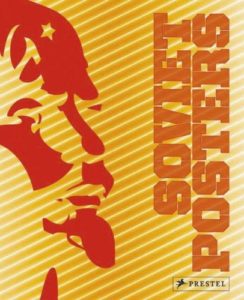 An interesting book reproducing poster art from the Soviet Union from 1917 to the 1980s.  All of the reproduced posters come from the private collection of Sergo Grigorian.  While many are rare posters — the Soviet government did not value preservation of posters as “art” — this is a somewhat arbitrary and partial representation of what Soviet poster art encompassed.  It specifically leans toward posters mass-produced using lithographic techniques.  Fortunately, there are numerous other books (in English) on Soviet art that can be consulted to gain a wider perspective, including catalogs of individual artists like Aleksandr Zhitomirsky, Aleksandr Rodchenko, El Lissitzky, Gustav Klutsis, Viktor Koretsky — not to mention in-depth treatments of photography, photomontage, constructivism and socialist realism in general.  David King‘s Red Star Over Russia: A Visual History Of The Soviet Union From 1917 To The Death Of Stalin Posters Photographs And Graphics From The David King Collection is also a more comprehensive multi-media collection of Soviet historical and artistic materials, with explanatory text that greatly aids in contextualizing the materials.  While Soviet Posters may be a very second-tier book on Soviet art, it is reasonably-priced, widely available, and still full of interesting images.

There are a few particular things worth noting about this book, pro and con.  The book has a short introduction, which is highly general and rather short, but deserves to be commended for avoiding the anti-communist editorializing that is endemic to so many English-language books about the Soviet Union — by way of comparison, Windows on the War: Soviet TASS Posters at Home and Abroad, 1941-1945 has much more detailed text but contains many irrelevant anti-communist editorial comments.  On the negative side, the lack of text makes contextualizing these posters more difficult, and the identifications of the titles and other background information is printed sideways and partially in a back index, which increases the difficulty in finding and reading such information.  The editor does not translate all of the posters’ text to English, usually only the titles.  Only a select few posters have additional explanatory text.  That added text is helpful, and one wishes there was (much) more of it.  Then again, better to have no text and let the posters stand on their own than to have merely anti-communist exhortations.

The book is organized chronologically, which presents a fascinating look at some of the changes in the poster art form across Soviet history.  The early years feature interesting innovations.  The Stalin years, and during the Great Patriotic War (WWII), the posters start to lack ingenuity and become drab and bleak — that holds for those posters selected for this book, but not for all Soviet art of the era.  But then during the Khrushchev era there are again more interesting posters presented.

It is common to identify these as “propaganda” posters.  While that is fair, the excessive emphasis on “propaganda” content by commentators is usually hypocritical.  These Soviet posters were explicitly and overtly political and ideological.  Look to any capitalist (or monarchist) country, by way of comparison, and the art is just as propagandistic.  Take, for instance, the film The Pursuit of Happyness, which is conservative, neoliberal capitalist propaganda.  So often, that other art simply denies its ideological content — it is ideology masquerading as post-ideological neutrality, much akin to “end of history” theory of the conservative political scientist Francis Fukuyama.  It is refreshing to see artworks that openly admit their propagandistic content.

I visited the Art Institute of Chicago recently and was struck by how the entire collection on display focused on artwork from capitalist, feudal, and related cultures.  There was an almost complete lack of any artwork from communist/socialist/anarchist/etc. societies.  The museum had featured temporary exhibitions on such art in the past, and their gift shops had commemorative books on the subject.  But it is good that this sort of art is being widely published, though there is still a ways to go to overcome anti-communist biases that still suppress it and relegate it to an inferior status.  This sort of artwork deserves, at a minimum, a place in the permanent collections of major museums and to be placed on regular display.