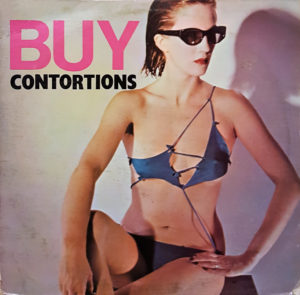 James Chance‘s band The Contortions weren’t the only group melding funk, punk rock and free jazz at the end of the 1970s and early 80s — there was also Public Image Ltd., Defunkt, Ronald Shannon Jackson, Essential Logic, and others.  But The Contortions offered one of the most succinct and brash statements, grounding their dissonant, atonal squawks and noise against heavy, grooving static funk rhythms.  The key to this music is that rhythm ties together in a nominally pop music way avant-garde building blocks that normally are mutually exclusive of “pop” music as such.  Granted, this is still eccentric stuff.  But there is always a strong beat to carry each song.  This “no-wave” music draws a distinction from earlier free-jazz-meets-rock hybrids from the likes of Captain Beefheart & His Magic Band (at least prior to Doc at the Radar Station).  James Chance plays alto saxophone Ornette Coleman style.  He is actually quite good at it.  He adopted a kind of Buster Poindexter persona (before Poindexter of course), with the attitude of a slick, arrogant proto-80s materialistic consumer, always in a suit.  I may turn to James White & The Blacks‘ Sax Maniac (1982) more often, but Buy is still probably the most innovative and polished offering by this band (and all its related offshoots).