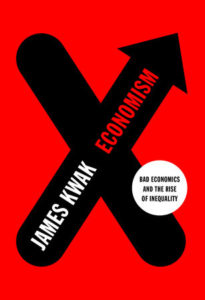 James Kwak – Economism: Bad Economics and the Rise of Inequality (2017)

Probably everything readers need to know about James Kwak’s book Economism comes from this quote by Richard Wolff (which, incidentally, pre-dates the writing of Kwak’s book):

“over the last 50 years, the major debate in mainstream economics has been between neoclassical devotees of laissez-faire and Keynesian devotees of government economic interventions. From the Great Depression through the 1960s, Keynesian economics prevailed and neoclassicals were marginalized. Since then the reverse situation has obtained. The crisis since 2007 shifted some influence back to the Keynesians, but the old debates continue. While both sides disagree on much, they do both endorse capitalism as ‘the best’ economic system and they do both cooperate to exclude Marxian economists from their debates, discussions, journals, and campuses.”

Kwak is kind of a “new Keynesian”, so naturally he fights against neoclassical monetarist economic theocracy, at a time when Keynesians have regained some prestige, while subtly joining with them to declare “there is no alternative” to their shared capitalist assumptions — a form of “university discourse”.  What is most embarrassing about his book is that the title, “Economism,” is a term coined by Marxists like Lenin to describe bourgeois economists who sought to exclude class struggle from discourse and pursue trivial reformist trends.  In other words, Lenin would have excoriated Kwak as guilty of “economism”!  Then again, like all Keynesians, Kwak is quite explicit that he would consider a democratic, Bolshevik-style revolution to be terrible — an outcome to avoid at all costs.  He makes a concerted effort to signal that he is an anti-communist cold warrior.  This is part of a larger trend of substituting “inequality” for class-based study of capitalism against alternatives in economics.  Anyway, Kwak’s book is pretty superfluous.  There are many, many books like this already in print.  Kwak’s is very readable, maybe more so than some others.  Yet the way it tries to paint neoclassical economists as ideologues while implying that its new Keynesian perspective is non-ideological is a joke — Kwak can fairly be accused of promoting ideology masquerading as a critique of ideology.