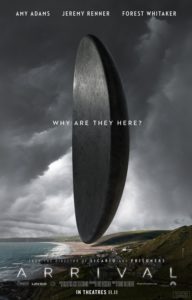 This sci-fi film has roughly the feel of Contact (1997), with a bit of The Tree of Life (2011) thrown in for good measure. Credit goes to the many members of the crew who make this a marvel of technical skill. But the script falls apart in confusion as the film goes on. The central story line involves the arrival of extra-terrestrials to Earth, and the attempts of humans to communicate with the aliens. The protagonist is Dr. Louise Banks (Adams), a linguist brought in by the U.S. military. A central plot point involves invocation of the Sapir-Whorf hypothesis, a real-life theory that is stretched to absurd lengths in the film. This is precisely where the film fails.  Rather than the grand tradition of using sci-fi scenarios to open space to discuss wholly realistic human social concerns otherwise barred from “respectable” discourse, Arrival reverts to empty deployment of “magical” actions. Actually, from the beginning to roughly the middle of the film, it seems almost that it will be about something that was in Stanisław Lem’s classic sci-fi novel Solaris that was excised from every film version — that humans are unable to comprehend “otherness” (explicitly that of aliens, but implicitly of other humans). But that would seem to be beyond what Hollywood permits, so by the end the plot gets dumbed down to pointless time-travel drivel.