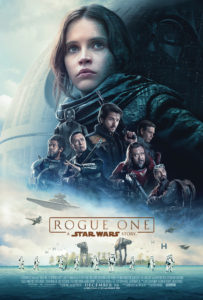 This movie is complete garbage.  The main characters are, for the most part, completely unsympathetic and the film hardly ever bothers to explain their motivations.  This (long) film mostly fills in the back story for some minor plot points in the original Star Wars films, with maximum emphasis on melodrama.  Just some examples of the absurdities that abound.  The characters need to get some saved electronic data.  In an era of hyperspace transport, this data is saved on magnetic cassette tapes.  Desperately escaping a villain, the protagonists flee to the roof of the storage facility.  Luckily for them there is a cassette player there that is hooked up to a satellite broadcasting antenna.  (It is funnier/campier when in National Treasure Nicholas Cage‘s character needs lemon juice to read “invisible ink” writings, and he opens a refrigerator to find only a large bowl of lemons).  And there is no meaningful explanation of why Forrest Whitaker‘s character is in the film, or does anything that he does.  Is he just around to draw comparisons to Battlefield Earth?  I have read reviews of this film praising the story and such.  Were those critics watching the same film?  Of course, the special effects are expertly crafted.  Big deal.

Aside from how terrible this film is, it might be worth reexamining it from the standpoint of “socialist realism”.  Obviously, this sci-fi epic is not socialist realism.  As science fiction it does not aim for “realism” as such.  And for that matter, the film engages in the well-known Hollywood trope of showing acts of labor only in conjunction with evil (the evil Galactic Empire that is building a space weapon, using some slave labor no less).  So it isn’t socialist either.  But the genre of socialist realism was at bottom about the critique of bureaucracy.  Isn’t that what the larger story arc here is about (if the melodrama is peeled away)?  It is simply really, really bad socialist realism.  Anthropologist David Graeber wrote The Utopia of Rules: On Technology, Stupidity and the Secret Joys of Bureaucracy and said there are no critiques of bureaucracy anymore.  He’s wrong in that respect, as this film shows.  But like actual 20th Century socialist realism, Rogue One approaches the question from the standpoint of the political center-right (and Stalinism), trying to put a happy human face on a bureaucracy that remains exploitative.  After all, looking at the entire Star Wars franchise, isn’t the vaunted Galactic Senate that ruled the Old Republic just a bourgeois center-right representative parliamentary system based on aristocratic privilege?  What good is that?  In other words, wouldn’t the entire Star Wars franchise be more interesting if there was some third group fighting alongside (and against) both the Rebels and the Empire, but fighting to make the fictional universe different/better than anything the Rebels or Empire put forward — like a secular state (not ruled by the Force and the attendant pagan religious cults) stripped of aristocracy, crime syndicates and such, and instead based on egalitarian principles.  Just take the high technology but advance the social structures through Enlightenment principles.  (Even the TV show Star Trek: The Next Generation did this, in its own way, by introducing the authoritarian Q Continuum and the hive-mind villains the Borg on opposite political flanks of the liberal Starfleet Federation).  So, the problem with this film is ultimately that it takes itself far too seriously.  Its pretensions spoil what would have been a lot more fun as camp.  Popular fare usually works best when it is campy — the essence of which is naive unpretentiousness.  By bracketing the political background of the story as a struggle between the far-right Empire and the center-right Rebels (plus a few tangential warlords and crime bosses who are just small scale versions of either the Rebels or Empire), it fails to have a serious political grounding — lying by omission, in a way, by ignoring a substantial facet of the political field.  But if the film naively presented the political struggle that way, then it could work, with the naivety suggesting/implying the possibility of the missing political coordinates.