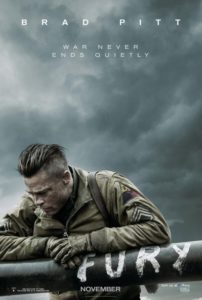 The problem with this film is that it has a beginning and an end.  Both are terrible.  In the middle there are worthy things.  But the ending is so stupefyingly, implausibly bad that viewers have to walk away embarrassed for having sat through it.  After opening titles that glorify American Exceptionalism, twisting the history of World War II to frame it as a conflict just between the noble but underdog Americans and the Nazis, the film starts by making Brad Pitt’s character out to be an inhuman monster (seemingly equally as bad as the Nazis), and those around him one-dimensional caricatures.  The film then seeks to humanize Pitt’s character, and add dimension to those around him.  The battle scenes in the middle of the film are excellently staged and are thrilling.  Of course, then there is the ending, which is so preposterously staged as to garner sympathy for the Nazis.  The Nazis (in vastly superior numbers) stand around waiting to be shot (really!).  The weapons they are shown marching with suddenly disappear and one Nazi indicates that a small box of other weapons must be rationed carefully.  The movie banks on viewers thinking that Nazi are so terrible that they should completely suspend disbelief at the staging of the final battle scene.  Ughhhh.  Terrible.

While clearly trying to follow on the style of Saving Private Ryan (an arguably even worse film), this ends up being a second (or third) rate version of The Big Red One.  Just compare the endings.  Lee Marvin‘s character in The Big Red One is, objectively, one who stands for something beyond himself.  Brad Pitt’s character stands for empty valor, no more.