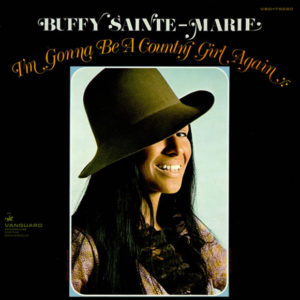 Lots of musicians “went country” in the late 1960s — think about country-rock outfits like Rising Sons and Bob Dylan going to record in Nashville.  Buffy Sainte-Marie was at the front end of that curve with her 1968 album I’m Gonna Be a Country Girl Again (released shortly before Sweetheart of the Rodeo and Joan Baez‘s incursions into country). While other artists sometimes created hybrid music, Sainte-Marie for the most part made an authentic Nashville album, complete with A-list Nashville session players (Grady Martin, The Jordanaires, Floyd Cramer, etc.).  This compares favorably to any late 1960s Loretta Lynn album, for example.  Sainte-Marie tried all sorts of different things on her late 1960s and early 70s albums.  She was remarkably versatile, and willing to venture outside folk music.  Other other hand, while side one of the album is great, side two suffers from having a few songs (“Tall Trees in Georgia” and a re-recording of “Now That the Buffalo’s Gone”) that return to the folk sounds of her early career.  Sticking with the Nashville sound throughout would have been more effective.  Still, that is a small issue on an otherwise great album — the folk songs are fine, just out of place.  For what it’s worth, it is kind of great that Sainte-Marie’s foray into country music is immune to criticisms of cultural appropriation.  Would anyone really accuse a musician with native Cree heritage of that?

The album was a flop.  There are numerous explanations.  But among the more unusual ones was that President Lyndon Johnson sent letters to radio stations on White House stationary to convince them to blacklist her in response to her anti-war song “Universal Soldier” becoming a hit (for Donovan).  Despite its lack of success at the time, this is an album worthy of reappraisal.  For that matter, Buffy Sainte-Marie’s entire career deserves more attention.