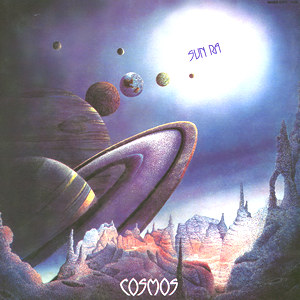 In July of 1976 The Sun Ra Arkestra played the Montreux festival.  Afterward, they lived in Paris for a couple months.  During that time they recorded Cosmos for the obscure French label Cobra.  The album has a laid-back, feel-good vibe.  Yet it is never too easy.  There are still some skronky horn solos, but they blend into mellow electric bass lines and leisurely accompaniment tempos.  John Gilmore lends a really beautiful inside/outside solo on “Jazz From an Unknown Planet” toward the end too.  The album also has that characteristically 1970s warm and round production aesthetic.  The music might be viewed as a synthesis of a lot of typical Arkestra styles, going back to stuff from the 1950s up through the fusion era, blended together as opposed to alternating to and fro.  Nothing here a Sun Ra fanatic hasn’t heard elsewhere, but the overall chilled-out ambiance is quite nice and this sustains itself well from start to finish.  A really nice one — among the more pleasant Arkestra discs of the era.