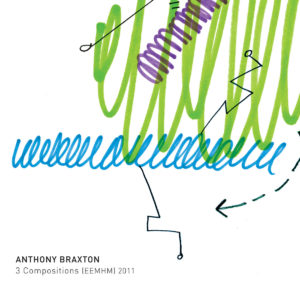 According to an official Braxton web site, “In this ensemble, all the musicians wield iPods [portable digital music players] in addition to their instruments, while navigating scores that combine cartography and evocative graphic notation, creating a musical tapestry combining live performance and sampled sound from Braxton’s extensive recorded discography.”  He calls this his “Echo Echo Mirror House” (EEMH) musical system.  Some of the digital recordings played back by the performers are easy to spot, because they include excerpts of vocalists from Braxton’s operas (none of the performers here sing) and include big band recordings that obviously include more than the septet currently performing.

Seem confusing?  In the liner notes, Braxton says, “Don’t worry about it – have a fun listening experience in a music that more and more is like life itself”.  But what life is that?  If there is a comparison, it is like being in an apartment building or house in which people in different rooms are playing recordings and performing music, and the listener drifts around hearing bits of everything, which overlap in different ways most of the time.

This music bears some resemblance to the heyday of “free jazz” in the 1960s — one comparison might be The Marzette Watts Ensemble.  But the zeitgeist of that era is long passed.  So it says a lot about Braxton’s eccentric methods that they can so effectively recreate some of that same old feeling in a new way for a new time.