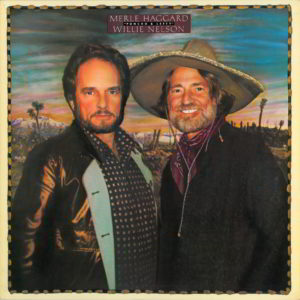 Here’s an album that occupies a strange place between “urban cowboy” country and easy listening pop.  Hag and Willie both sing really nicely, even if most of the material is pretty fluffy.  The synthesizer, electric bass, trebly electric guitar and other little orchestrated touches bestow on it a dated, faddish sound that is unmistakably of its era, but, for what it is, it delivers fairly consistently.  The slickness isn’t too much of a distraction.  There aren’t any obvious stinkers here.  As a long as expectations aren’t too high, this is a nice light outing.  The best song is probably “Opportunity to Cry,” which has no discernible input from Haggard.