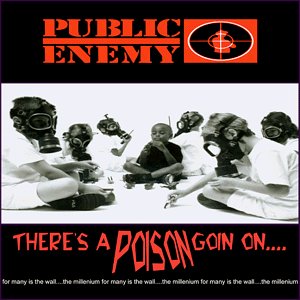 After attempting to rethink the basis of Public Enemy’s music on the He Got Game soundtrack, which garnered mixed reviews at best, PE rethought their music again on There’s a Poison Goin On.  In a way, it sort of set the tone for a lot of what the rest of PE’s career would be about.  He Got Game catered to the more melodic R&B-inflected style of hip-hop that was gaining popularity at the time.  The title track was great, but the rest didn’t impress.  With There’s a Poison Goin On the group sort of splits the difference between more melodic beats and singing/raps and their old style.  The results?  Well, music nerds and hip-hop heads debate the best Wu-Tang Clan solo albums.  This might be the best Wu-Tang “solo” album made by people unaffiliated with Wu-Tang!  Chuck D is political, but less so than a decade earlier.  “World Tour Sessions” is the catchiest thing here, and it has a little bit of Chuck’s politics, but it has a softer hook than something like their early 1990s hit “Can’t Truss It.” “I” is great.  This was DJ Terminator X‘s last album with the group until a surprise reunion with the group more than a decade later.

Aside from the purely musical aspects of the album, Public Enemy established their new business model here.  They signed with a new label dedicated to online distribution (though this was released in physical format too).  The label flopped, as broadband internet access was not widespread yet.  But more than distribution channels, the group was ready to sidestep major labels and stick with a more independent path, allowing them to try new things and have more control over their work.

This is a middle-of-the-pack PE album, but one that is worthwhile for fans who have already heard the classics.