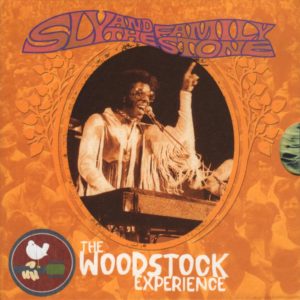 I think it’s great that the complete performance of Sly & The Family Stone at Woodstock has finally been released — it only took 40 years!  What is amazing is that the band has a long-standing reputation as having put on fierce live shows in their prime, yet other than a few stray songs on festival compilations they never released a full-length live album.  That always seemed incongruous.  Now, finally, at least the Woodstock performance is available.  It starts off inauspiciously with “M’Lady,” which is followed by an apology for the bad sound and a plea for corrective measures.  After that, the sound does improve, even if it’s still not perfect.  The group certainly did have a complex sound, with vocals coming from just about everybody, a horn section, and lots of interaction from all the performers.  The music placed stiff demands on the still evolving equipment of the late 60s.  Anyway, when the band gets rolling, they are quite a force, regardless of the sound problems.  They focus on a lot of uptempo, funky numbers with a lot of drive.  Rose Stone‘s organ takes a prominent position.  This is just a great performance, and I can only hope that a band as successful as Sly & The Family Stone–led by a noted producer no less — recorded more live material that will be released some day.

There are a few things to be said about the packaging here.  A whole series of “Woodstock Experience” collections were released featuring Woodstock recordings of an artist/group together with the studio album they released beforehand (in this case, Stand!).  The cynic in me looks at this as a crass marketing move, given that live Woodstock performances are likely to appeal mostly to fans who probably already have the studio album — forcing them to repurchase it to get to the new live material.  Though these seem to be priced such that you aren’t totally ripped off if you are repurchasing.  More significant is the inaccurate designation of “previously unreleased” material.  “Love City” is denoted here as previously unreleased, which is incorrect because it was released on the 1994 comp Woodstock Diary.