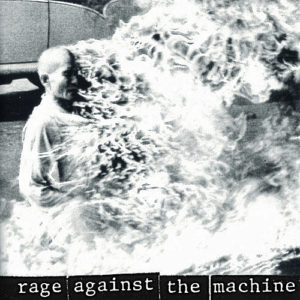 Basically, no matter how much the politics here (and there are definitely politics at work here) are basically well-intentioned, even correct, it is hard not to think of these guys as complete and total failures.  I mean, almost all my friends loved these guys back in the day.  But did any of my friends really agree with the politics here?  Maybe one, who wasn’t exactly the biggest fan.  It is fueled by adrenaline (and testosterone).  Put this on and just try to sit and listen to it, and it comes across as pretty corny.  Even if Zack de la Rocha‘s vocals are sort of the iconic angry-person’s vocals for its era, the musicianship is sort of barely there across the album.  There is this overt attempt to be the 1990s version of MC5.  But it doesn’t quite get there.  I mean, this all boils down to a rap-metal version of 1970s cock rock.  It’s fist-pumping, high energy stuff, but, isn’t a lot of quite reactionary bullshit just the same?  What draws people to this music is the rather politically neutral raw energy behind it, which can be used for any ends.  And, yeah, plenty of people have pointed this out, but it’s hard to avoid being labeled hypocrites when you name your band “rage against the machine” then sign up with a record label owned by one of the biggest multinational corporations in the world (oops).  These guys could have pulled a Fugazi and maintained some integrity, but they didn’t.  So, that brings us back to the politics, which must be considered either ineffectively conveyed, a mere ploy, or just random shit (though its hard to believe it’s pure random shit given how long these guys have stuck with it).  But whichever it is, this kind of cheapens the politics by making them an irrelevancy.  Damn shame too.