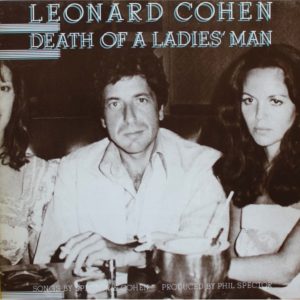 If it’s anything, this album is frustrating.  It is basically two entirely different albums smashed together — and they go together like oil and water.  Phil Spector provides a dense, rich backdrop in which Leonard Cohen’s songs and voice seem entirely lost.  At his most effective, Cohen’s music has a personal intimacy that seems to speak directly to the listener.  Spector’s music, on the other hand, revels in a kind of jubilant — even garish — kind of festive quality, which is fit for dancing and get-togethers.  Together, Spector and Cohen are a match made south of heaven.  On Death of a Ladies Man, Spector is doing what he always does, hardly different from anything he did with The Ronettes, etc.  He doesn’t give an inch.  Cohen is writing some excellent songs, ones that embody a late-Seventies come-down and are filled with an incisive sense of resignation and disappointment.  But finding your way to Cohen’s astute lyrics is far more of a chore than it needs to be.  As a singer, Cohen is unsuited to this kind of musical setting.  His limited vocal abilities don’t exactly allow him to pull a voice like Ronnie Spector or Tina Turner out of his back pocket.  That puts more of the blame on Phil Spector for the underwhelming results.  Even if the musical backdrop is fine in and of itself, it needs to suit the star performer.  Spector’s production would have befitted, say, Scott Walker (now there was a missed opportunity!).  Here, it’s all wrong.  This record is a minor disaster saved only by the fact that concentrated effort reveals a lot of substance in Cohen’s lyrics.  As an aside, it is interesting that some of Cohen’s vocal duets with Ronee Blakley distinctly recall Bob Dylan‘s with Emmylou Harris on Desire from a year earlier (and Dylan, along with Allen Ginsburg, makes a cameo appearance here on “Don’t Go Home With Your Hard-On”).