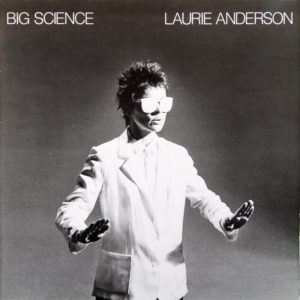 Laurie Anderson found unexpected popular success in the 1980s.  Her music is dominated by a “performance art” aesthetic, that goes with her art school background.  There was a cable TV show called “Six Feet Under” where one of the main characters goes to art school and encounters there another student who does performance art concerts that seem directly inspired by Laurie Anderson.  Anyway, Anderson doesn’t “sing” much, but rather does very deliberate spoken word recitations, in a detached and deadpan way that is almost a monotone at times, characterized by many pauses between words for dramatic effect.  She isn’t “rapping,” though there is a kind of rhythm to her speech.  Occasionally she uses a vocoder to create a computerized vocal effect (which would have seemed rather futuristic back in 1982).  The music is generally minimalistic, with lots of repetitive figures that create vamps, which actually do change gradually over the course of each song.

Big Science features studio recordings of songs excerpted from her long performance piece United States, a complete live recording of which was issued two years later.  She is preoccupied with a critique of contemporary capitalist society, without resorting to polemic.  She instead relies on a tone rife with what can be called kynicism — or what might equally be called “classical” cynicism, something Anderson seems to have adapted from William S. Burroughs.  This is a critique, though, because Anderson isolates and focuses attention on the sorts of things that social forces of the time relegated to the background and took for granted (for precedent, look to Thorstein Veblen‘s classic sardonic takedown of the rich, The Theory of the Leisure Class (1899)).  She takes the commonplace and makes it suddenly seem strange.  The title track is one good example, as she comments on the awed reverence of scientism, opening the song with wolf howls (kind of hilarious when given a moment’s thought) and singing the lyric, “Big science / hallelujah,” against an organ to provide the impression of a futuristic Benedictine religious chant.  Take also the opener, “From the Air,” which has Anderson playing the role of an airline captain providing instructions as her plane is about to crash, in an (as it turns out) incongruously calm voice.  It is that sort of juxtaposition that Anderson develops on many of these songs, throwing into relief the bizarre motives and unnatural customs that prop up contemporary society.  Later in the song she says, “Put your hands over your eyes / jump out of the plane / there is no pilot / you are not alone / standby.”  The improbable hit song was “O Superman (For Massenet).”  What all the songs have in common, though, is a commitment to making the listener experience their critiques rather than explain them or simply lecture the audience with a series of conclusions.

This album, for all its focus on the technological banality of 1980s consumer culture in middle America, has held up remarkably well.  There is a kernel of interest here to anyone dubious of all sorts of other electronic distractions that emerged even years and decades later.  But Anderson also goes beyond just a focus on technology to fairly universal human interpersonal concerns.  If there is a flaw it is that the last two songs (the medley “Let X=X / It Tango“) aren’t quite as engaging as the others, or at least are kind of different than everything that precedes them, but that is a small quibble.  This is the album that launched Anderson’s career, and it remains the place to start for newcomers.