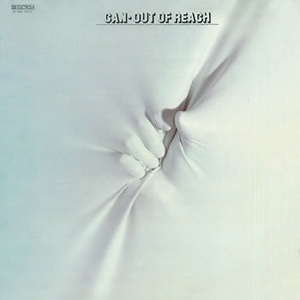 Widely regarded as the worst CAN album — it was for a long time omitted from a reissue program.  No doubt, this is not music quite like what the band was making from 1968-74, for a number of reasons.  This comes across as a bit slight most of the time.  And another reviewer was probably right to say, “About half of this is merely OK; the other half is terrible.  I’ll leave you to decide which half is which.”  And yet, on the whole, this is passable enough.  If there is a parallel, it would be The Beach Boys when they brought in Ricky Fataar and Blondie Chaplin, and in the years that followed when the band flirted with disco and such.  In CAN’s case, it was new members Rosko Gee and Reebop Kwaku Baah from Traffic.  There is a pronounced shift here with a focus on club/disco music and easygoing, grooving prog rock.  If there is one thing that annoys urban elites, of the sort who are the main body of supporters of avant garde acts like CAN, it is to dally with the music of the uneducated rabble, which is a big part of the demographic of disco, and groove rock.  There is a tendency to consider any engagement with disco (or groove rock), and its fans, to be inherently slight.  Maybe, or maybe it is just elitist bigotry?  Frankly, Rosko Gee’s songs (“Pauper’s Daughter and I,” “Give Me No ‘Roses'”) are not bad, just quite different from the sort of music CAN fans were accustomed to from the band.  But this is just like Fataar and Chaplin’s contributions to The Beach Boys (“Leaving This Town,” “Hold on Dear Brother”).  Still, this is a pretty middling album at best, and much of it feels worn out.  But taken entirely on its own terms it works adequately enough as background music.  That is not much of an endorsement, which the album wouldn’t deserve, yet in the right setting it sounds perfectly okay.  The better songs are in the middle of the album (the end of side one and the beginning of side two in the original LP format).  Should I feel bad about kind of liking this, mediocre or not?  Nah.