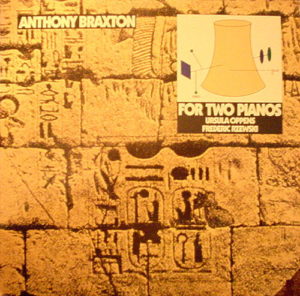 Not jazz, but modern composition. Anthony Braxton does not himself perform on this record.  It is reminiscent of Arnold Schönberg, as well as Hildegard von Bingen and John Cage, and also kind of presages things like Scott Walker‘s The Drift.  The performers play piano as well as melodica and zither, and perform in floor-length hooded cloaks. The ritualistic and ceremonial elements here would also show up on other works like Composition No​. ​102 (For Orchestra & Puppet Theatre).  The feeling is ominous, menacing even at times, with simple repeating melodic figures that slightly foreshadow ghost trance music.  Some of those melodies are similar to ones Paul Buckmaster later used in his score for the film 12 Monkeys.  This is one of the more effective recordings of a Braxton “classical” (non-jazz) composition, partly because with just two performers there are less rehearsal demands (or at least ones that fit into the recording budget).  Recommended.