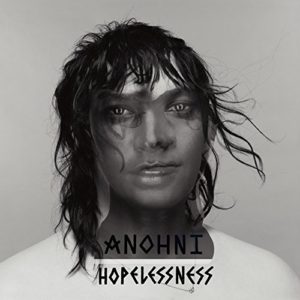 ANOHNI’s (formerly Antony Hegarty) solo debut is a resolutely political work inhabiting a space not unlike P.J. Harvey‘s The Hope Six Demolition Project, with many of the same pluses and minuses.  Harvey’s album railed with righteous indignation against the Tories and the cold, heartless class war they are waging in England.  ANOHNI is from the U.S. and her focus is instead located there.  And both deliver blunt, progressive political messages in ways that don’t seem particularly musical, in the sense that the musical backdrops in each case seem almost ready-made and conservative.  Hopelessness combines familiar glitchy electronica while the vocals invoke the catastrophes of the contemporary world.  “Drone Bomb Me” and “Obama” are direct indictments of murderous wars of aggression and the depraved madness of the political servants of the ruling class.  “Four Degrees” is a stark testament of complicity in the environmental destruction of the anthropocene era.  This is a juxtaposition of poppy beats, with all the implied escapism and feel-good utility, with grave and discomforting texts, with all their heavy political weight.  It is an awkward juxtaposition, and meant to be such.  This music is an overt attempt to rattle listeners out of the complacent acceptance of the status quo — to make them confront the banality of evil in their lives.  All this may well be true, but is Hoplessness effective?  That may be an impossible question to speculate on, but suffice it to say this is a difficult listening experience meant to make the listener uncomfortable.  And the problem is the very conceptual nature of the album — often a bit too binary and simplistic and even formulaic (a problem generally avoided by the likes of, say, Laurie Anderson).  There should be few doubts about ANOHNI’s good intentions, but those intentions only go so far.  Perhaps that’s even the wrong way to put it.  The intentions of this album are inescapable, like being confronted by someone doing political canvassing, and often Hoplessness is no more artistically memorable.