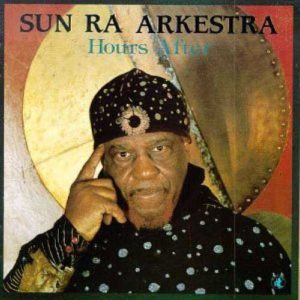 Why don’t people like this more?  It’s pretty much a continuation of what Sun Ra was up to with Reflections in Blue, but also Blue Delight and Purple Night, or even The Futuristic Sounds of Sun Ra for that matter.  Mostly it leans on big band traditions with trademark Ra harmonic twists and rhythmic subtlety, to great effect on the first two numbers though a little less so on “Beautiful Love” with its quavering vocals.  The last part of the album gets into his more sci fi exotica stuff.  In all, the performances and arrangements are quite good — better even than some of the late 1980s albums just mentioned — and the only real drawback to this is the production, which has a sterile and flat feel that was unfortunately common at the time.