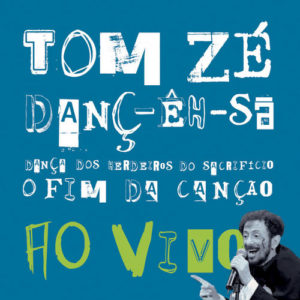 The album title translates roughly to “Dance-eh-Sa (Dance of the Heirs of Sacrifice) – The End of Song: Live.”  The individual songs are tributes to past revolutions, or failed attempts at revolution.  Up to his usual tricks, like a modern Socrates, Zé seems to be trying to stimulate thinking about what revolutions mean in the present.  Consider what Slavoj Žižek wrote in Trouble in Paradise (p. 143-44):

“permanent political engagement has a limited time-span: after a couple of weeks or, rarely, months, the majority disengages, and the problem is to safeguard the results of the uprising at this moment, when things return to normal.  *** The battle has to be won here, in the domain of citizens’ passivity, when things return back to normal the morning after ecstatic revolts; it is (relatively) easy to have a big ecstatic spectacle of sublime unity, but how will ordinary people feel the difference in their daily lives?  No wonder conservatives like to see sublime explosions from time to time — they remind people that nothing can really change, that things return to normal the day after.”

Is this not precisely what Zé is cultivating with this music — trying maintain an interest in a revolutionary spirit in a time of (relative) prosperity, with the big spectacle of revolution seemingly a thing of the past?

The songs use many onomatopoeic sounds, like “Atchim” (for sneezing) and “Uai” (for amazement).  The effect is a kind of universality.  These things don’t mean much of anything in particular.  But in that respect they mean the same thing now as they did in the times of the revolutions that Zé pays tribute to.  They also prevent this from being dour stuff.  The performances are meant to have levity and playful humor.

This live recording is arguably better than the studio counterpart.  The drums and guitar are a little harder and further forward in the mix.  There are also fewer electronics and hip-hop references.  Also, the best songs are sequenced first here.  This perhaps is more of a second-tier Tom Zé album, but it’s still a good one.