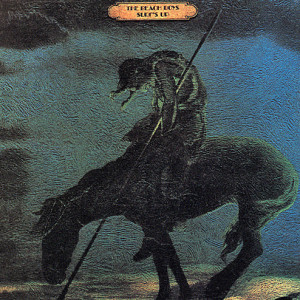 Surf’s Up is an odd little album but one containing some amazing Brian Wilson songs. A dark melancholy pervades the disc. “Surf’s Up,” with lyrics by Van Dyke Parks, is a holdover from the Smile period. It is a thrown together mishmash, like the whole album, but it has the spark of incorruptible genius hovering about its ordinary and vital emotions. “Surf’s Up” is a lost but confident stroll through a dream for good in the world. Parks’ surrealist lyrics (like “Laughs come hard/ in Auld Lang Syne” and “Surf’s Up/ umm-mmm umm-mmm umm-mmm/ aboard a tidal wave/ come about hard and join/ the young and often spring you gave”) help make Brian’s “Surf’s Up” about the best song The Beach Boys ever did. “’Til I Die” is another classic with a slightly more uncertain feeling. Actually, just the Brian Wilson songs that close the album make Surf’s Up essential for fans. Despite one dud rocker song and some questionable keyboard effects, the mellow satisfied quality pervading the album serves as a nice lead-in to the album’s powerful finish. It takes some dedication to appreciate what this album is, but with sometimes-strong contributions from various band members (e.g., “Long Promised Road”) it is worth the effort to find Surf’s Up and go beyond the group’s Sixties material.