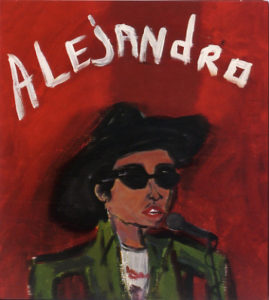 One complaint frequently leveled at Alejandro is that his albums are rarely as good as his live shows.  Even his really good albums sometimes sound overproduced.  Well, this one goes a long way towards filling any gaps in that respect (I think it ended up being the long-awaited fan-oriented live disc the release of which was pushed back about two years).  The last two tracks are throwaways (even if I was present at the Turf Club when one of them was recorded, the sing-along “Sad & Dreamy (The Big 10),” so technically I appear on this album!), but overall this album really finds all the passion and eccentricity of Alejandro’s live shows intact.  He’s one of those mature songwriters, like Townes Van Zandt, Lou Reed, and a few others, that come along only rarely and can convey a whole bunch of emotions and experiences in a genuine and convincing manner, full of nuance and gravity.  As reviewer BradL says, “He’s particularly good on the foibles of masculinity and, of course, hard love is one of his specialities.”  I really like this set.  It’s got some heavy rockers, some ballads, some covers — no Alejandro live show is complete without a few choice covers.  The band is with him all the way through.  Although this might not be the place to start, unless you’ve just witnessed one of Alejandro’s live shows, I find this one of the most enjoyable discs in the man’s catalog.