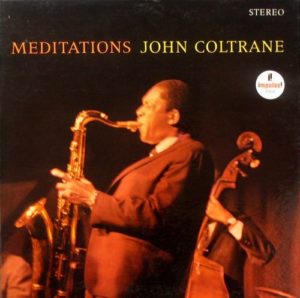 Meditations features one of the unusual line-ups of Coltrane’s post-Ascension recordings. Coltrane plays exclusively on the left channel with the talented Rashied Ali, a fiery and highly abstract drummer. The right channel features a young Pharoah Sanders blasting his aggressive and abrasive-but-warm saxophone, along with veteran Elvin Jones on drums. McCoy Tyner on piano and Jimmy Garrison on bass then bring balance to both channels.

John Coltrane had the most fully formed and beautiful tone of just about any saxophonist. His technical perfection was only surpassed by his unfathomable improvisational style. Coltrane could effortlessly assimilate any influence. More than simple imitation, Coltrane drew the very essences of these influences and developed them into new forms. Here, the abstract rhythms of Rashied Ali and the rough texture of Pharoah Sanders combine in this journey away from conventional structure. John Coltrane is generally the last word on anything he has attempted. Listening to him play reveals the all the joy and beauty of the universe. The limitless possibilities of a loving, peaceful existence unfold with the clarity of prophets. Here, he explores the most basic elements of humanity; however, he connects living elements to divine pursuit of Truths (yes, with a capital “T”), as explicated through his music.

“The Father and the Son and the Holy Ghost” sounds forced into unnecessary structure. The solos, particularly Coltrane’s, at times seem to lose sight of their original goals, and yet, the passion and faith never waiver. Coltrane had a gift for shrewd commentary. A serious and deeply spiritual person, he could reaffirm his faith while simultaneously criticizing the church (he believed in all religions).

“Love” begins the last three movements. The dissonance of Coltrane’s melodic line resolves to a three-note consonant line. Jimmy Garrison begins the song with a moving solo. Coltrane broke jazz conventions as he dove completely into free jazz. The first two songs are continuous performances, as are the last three. Songs begin with solos, only revealing a defined statement much later. On “Consequences,” the two saxophonists blur the beginnings and ends of their solos beyond identification.

Traditionalists generally jump ship after A Love Supreme (more precisely, before Ascension) and ignore all late-period Coltrane. Yet, the most rewarding material comes from his final years. Meditations features John Coltrane at his most intense (at his most passionate, Coltrane is not casual listening). It is a foolish thing indeed to attempt to explain what Coltrane achieved with this album.

“Of course, no privileged political agent knows inherently what is best for the people and has the right to impose its decisions on the people against their will (as the Stalinist Communist Party did). However, when the will of the majo[r]ity clearly violates basic emancipatory freedoms, one has not only the right but also the duty to oppose that majority. This is not reason to despise democratic elections — only to insist that they are not per se an indication of Truth. As a rule, elections reflect the conventional wisdom determined by the hegemonic ideology.”

Bonus links: “Draft Declaration of the Rights of Man and of the Citizen” and Footnote Four of Carolene Products 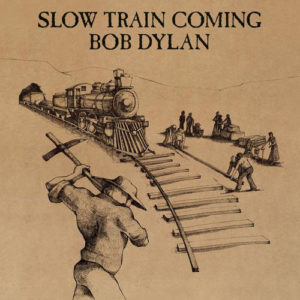 I’ve developed a theory that Dyan’s “christian” phase that began with Slow Train Coming was less about him converting to a particularly dogmatic strain of pentecostal christianity and more about him implicitly moving into the same camp as French academic charlatan Michel Foucault (maybe the “new philosophers” like André Glucksmann could be thrown into the conversation here too).  The reasons some people are skeptical of this part of Dylan’s career are the same reasons some people are skeptical of Foucault’s neoliberal historicist/”identity politics” theories, which are complete bullshit and evidenced a questionable kind of pandering and opportunism (not to mention a huge over-reliance on revenge fantasies).  But, anyway, this album was recorded in Muscle Shoals, and it has a smooth disco R&B/soul sound, like a mellower, less emotional counterpart to Bowie‘s Young Americans or even a more intellectual counterpart to the lily-white blues rock of Eric Clapton.  It’s a little too easy listening for its own good, but it still manages to be decent with a few good new songs.  The album benefits tremendously by having Dylan actually trying throughout, and having active involvement of producers other than Dylan.

Link to an article by Ruth Fowler: 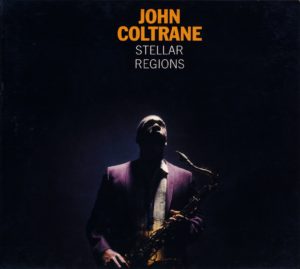 Stellar Regions was recorded on February 15, 1967. The recording masters were kept by Alice Coltrane for decades before release. What makes Stellar Regions an essential ‘Trane disc (it is phenomenal, perhaps the better of even A Love Supreme) is the dramatic changes evident in his music. His vibrato shifts from the wide style of John Gilmore and Albert Ayler to a quicker, gushy style resembling Ben Webster. He jumps from a rumbling low register to a smooth, clear higher one, like the vocals of Rev. Claude Jeter.  Of course, tempos of the songs are much slower than as heard on Interstellar Space, recorded slightly earlier. In a sense, it is clear on hearing these recordings that Coltrane was dying. But this is without sadness. Coltrane’s music is completely at peace. While in his music he perhaps sees in the distance some great horizon yet uncrossed, there is also a total acceptance of what is within his reach. Jimmy Garrison is at his peak on “Jimmy’s Mode” with a solo tender but hip, questioning but aware, fluid but crisp. His solo finds where a delicate swing fits into Coltrane’s vision. As an artist, Coltrane was still in motion. As his battle alternated from confidence to uncertainty he added new perspective. He used every defilement to see clearly, and from there collected his many views and assembled, regrouped for further toils. This is the start of a new life. It is complete rebirth. Such a thing seems possible here. Stellar Regions is like a musical accompaniment to Arthur Rimbaud’s Les Illuminations [The Illuminations]. It is a spiritual recognition of the vast possibility beyond that grasped in the present. Yes, Stellar Regions communicates about all that needed be said before Coltrane went silent upon his July 17, 1967 death. This album is, along with Interstellar Space, Music. By that I mean this is the culmination of everything music — and Coltrane — was and is. What a wonderful thing.