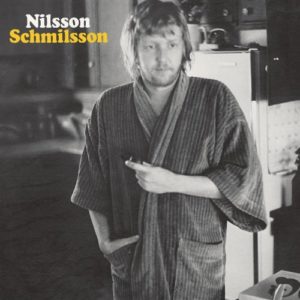 Something I’ve observed through the years is the utter vacuousness of so much pop music from Los Angeles.  Yes, that is a commonplace observation.  L.A. is/was a cesspool.  But what that observation hides is the way that L.A. provided some unique opportunities for refugees from the East Coast.  Harry Nilsson was one of those.  Rightly or wrongly, he was in a state of crisis in New York, and relocated to L.A.  What this meant was that he had the opportunity there to work though his New York problems by way of his music, for whatever reason free from the hangups that would have dogged him in New York.  In a few years, he acclimated to L.A., and, after brief period of sanguinary transition, his music eventually became rather tediously blithe.  He lost touch with a New York frame of reference, and the L.A. frame just came across as complacent, slight and insular.  But, getting to the point, Nilsson Schmilsson came from the brief Goldilocks moment when Nilsson was this affable New York joke-ster out of his element, ready to appear on the cover of his album in a bathrobe, stoned and holding a bowl of marijuana, the photo out of focus.

Often in the conversation of “best albums recorded with a studio band,” this covers a range of song styles from ballad, to novelty, to rock and roll rave-up.  Reviewer Patrick Brown sums this up admirably:

“To me, this is an utterly charming album from beginning to end. I can’t understand how anyone who’s ever had a regular job could fail to be attracted to the first three songs, how anyone who’s been in a relationship that didn’t go as well as planned could fail to enjoy ‘Down’ or ‘I’ll Never Leave You’ or ‘Without You,’ how anyone with a rock and roll heart could fail to enjoy ‘Jump Into the Fire,’ or how anyone at all could fail to enjoy ‘The Moonbeam Song’ or ‘Let the Good Times Roll.’ Maybe this just shows my lack of imagination though. Regardless, I do find it nearly irresistible. Nilsson sings about real stuff but never takes himself too seriously, always seems to have his tongue hovering somewhere near his cheek when it’s not firmly planted there. But it’s not just novelty, I swear it. I mean really, most people do have to wake up, drink coffee and head to work. Why aren’t there more songs about that?”

It is tempting to expect Nilsson to kind of give up the charade, get to his real, unironic core message/personality.  But what endures about this album is how that moment never arrives.  He holds up the various commonplaces of commercial music and, rather than ridicule them, just sort of oddly embraces them as slight pleasures.  As it turns out, there is no deeper meaning.  What has the impression of being a joke ends up being ridiculously sincere — almost a precursor to comedian Andy Kaufman.  You just sort of have to recognize the banality and ironic irony (a kind of double negation) of this spectacle of commercial rock.  It is a beautiful anti-climax.  This is a record that accomplishes “nothing” so very, very well.