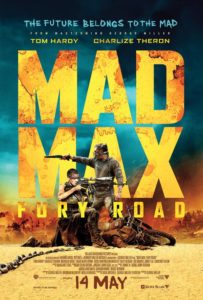 Here’s a movie for which the glowing critical praise is perplexing.  It is a deeply hypocritical film.  For instance, it takes pains to pass the “Bechdel test” and insert feminist positions, like the female revolutionary character Imperator Furiosa (Charlize Theron).  And yet at the same time the film has a group of scantily clad women prancing about in what is uncomfortably close to a wet T-shirt car wash scene.  These positions are not compatible as they are portrayed, in that the film engages in the worst sort of pandering, trying to have it both ways, appealing to feminists and sexists.  This is like the worst form of facile multiculturalism.  The plot, as much as there is one (and there barely is one), is kind of inferior to Mad Max 2: The Road Warrior, which already sets forth in starker terms the symbolism of pointless wars over resources (especially fossil fuels).  Still, this film has a lot of action sequences and special effects — the movie is practically one long stunt scene — and they are good, as are the costumes and other technical aspects.  But those things don’t make up for the film’s flaws.