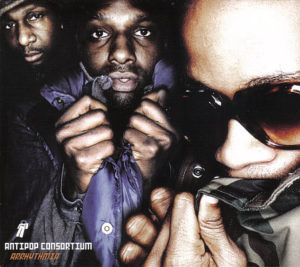 Hip-hop often is very boring, because so much of it is so conservative.  There are plenty of acts following the party line, so-to-speak.  Everything is wrapped in the protective blanket of genre “rules”, and expectations and ambitions are contained within carefully delineated formulas that can seem like an inescapable supermassive black hole.  Then, on the other end of the spectrum, there are acts like APC.  With cerebral, abstract lyrics jammed full of non sequiturs and poetic wordplay, plus production that bears more resemblance to European electronica than traditional breakbeats, these guys definitely offered a unique sound.  And they were willing to depart completely from convention to do that.  It seems APC are loathed by many solely because their records don’t resemble so much other hip-hop music.  But that kind of criticism (if I’m generous enough to even call it that) is so thick-headed and laden with narrow-minded assumptions that it hardly is worth the effort to debunk such obviously flawed logic.

One of my favorite aspects of Arrhythmia, clearly the group’s best album, is the way in which it sidesteps all the nonsense that I earlier dubbed “the party line”.  This album isn’t about grown men trying to live out adolescent fantasies.  It isn’t about macho boasting of vicious and violent tendencies, not to mention empty self-promotion and grandstanding about non-existent talent.  It isn’t really about demeaning women or homosexuals.  It isn’t an apologist’s monologue on life as a dimwitted fool.  Of course, the album isn’t explicitly about avoiding those things, in some kind of preachy, paternalistic fashion either (except maybe parts of “We Kill Soap Scum,” if I read the symbolism right).  Like I said, it sidesteps all that, and ultimately derives its power from allowing us listeners to ignore the party line out of existence.  Instead the listener is treated to esoteric wisdom, abstract personal narratives and funny musical tricksterism.

The group:  M. Sayyid was perhaps the best rapper around at the time, in terms of his technical ability to vocalize, and yet was still willing to joke around with his lyrics.  Then there’s Beans, who is an incredibly well-rounded rapper, capable of writing some impressively complex lyrics.  High Priest may have the least imposing talents, but he’s a master of rhythm and timing, and he can build tension by applying those skills like few others.  Producer Earl Blaize finely crafts minimalist, glitchy beats in a way that smoothly pulls together the contributions of three rappers who are really quite different in their individual styles.

This disc is definitely not the kind of thing you would throw on at a party or a dance club.  It’s more inwardly drawn and inflected.  There is hardly a single sample on the whole disc, stripping the affair of clear reference points.  This isn’t to say more dance-oriented stuff is automatically whack, but why must everything be that way?  APC go in another direction.  They certainly aren’t the only ones who do that.  Although I do feel like they were among the few acts around the turn of the millennium identified with the hip-hop genre that made music that was interesting for what new ideas it presented rather than merely how well it satisfied genre formulas.  Hell, there ain’t many act period that can do that, hip-hop or otherwise.

But of course, if there is no other reason to love this album, I must add that here High Priest delivers one of my favorite lines in hip-hop on “Dead In Motion”:

“Shasta after I slash rap with a protractor”