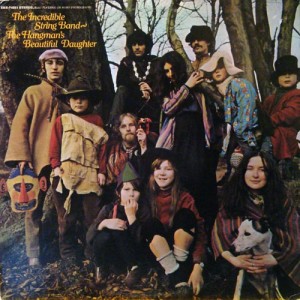 Imagine a hippie commune in the late 1960s.  What music is being played? Maybe something like The Incredible String Band (ISB)?

There are a few things that mark basic political differences.  One of the most fundamental is respect for traditions of inequality versus change in the direction of egalitarianism.  This is the best way to look at ISB.  There should be no doubt that they fall on the side of change.  But they argue for change by playing all sorts of traditional music.

The vocals tend to sound completely improvised — with Robin Williamson especially, but with Mike Heron too.  It is like they just read the words off a page and came up with whatever melody they could, on the spot.  That impression gives way to carefully harmonized choruses.  That of course gives lie to the idea that this is all haphazard.  The instrumentation is eclectic, to the extreme.  One minute there are references to Indian classical music, another to christian hymns.  The epic “A Very Cellular Song” epitomizes the jumps between styles — one prominent segment is a rendition of the Bahamian hymn “I Bid You Goodnight (The Christian’s Good-Night).”  It is obvious how the jumps place all the pieces on an equal footing, subverting the sort of rigid hierarchies that go with any one sort of musical tradition.  So a strange thing emerges.  This is music simultaneously drawing from tradition and subverting it.  There is no hint of irony in the use of the traditional elements.  Yet there is no doubt that ISB repurpose those traditional forms for entirely different ends.

The Hangman’s Beautiful Daughter is one of the band’s most well-regarded albums.  But this also came along in 1968, just as it seemed like the counterculture was going to transform the world.  ISB played Woodstock the following year — in an off performance.  Of all the hippie-dippy music made in that era, this album is one that really pulls it all together wonderfully.

Of course, this is kind of a middle class rebellion.  It escapes oppression by turning to simple folk musics, an approach summarized as “people wanting to scale back in order to live more balanced lives[.]”  This sort of presupposes the means to break away and create a separate space for this kind of rebellion and escapism.  One reason that the music has an experimental feel that suits the music so well is that the experiments provide “useful models for things that could then be generalized in altered conditions.”

In some ways the follow-up Wee Tam & The Big Huge is a more likable album — perhaps more epic too.  But this is still a great one, from a time when it seemed like a real possibility that the world would really, really change and the good guys might lead that charge.  It may be anachronistic today.  Forty years later that hippie commune — more likely an entirely new one, because that one from the 1960s didn’t survive — would probably be playing the more dystopian psychedelic folk of an outfit like Sunburned Hand of the Man.  Yet ISB is still a shining example of how positive and hopeful music can be that reflects a totally alternative outlook on the world.  Maybe that has lost favor but it is still a compelling vision on its own terms.