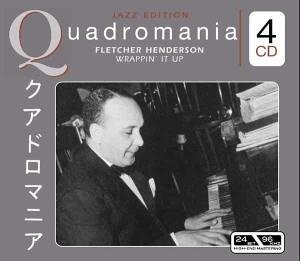 Fucking wow!  I knew about Fletcher Henderson a little, that he was perhaps the first great swing big band leader and was a big influence on everyone from Ellington to Sun Ra.  But I just didn’t comprehend just how massive his recordings are.  This set, at four CDs, is hardly ever less than stellar.  I can think of some pretty major artists of the 20th Century who can’t fill a single greatest hits disc!

I guess there are some artists who seems to spend there entire career working to refine what amounts to a single idea.  It may be a big idea, but it’s still just one idea.  You could name some great musicians, like Cecil Taylor, who fall into that category.  On the other hand, I’ve always been more interested in those who seek to continually come up with new ideas, like Jean-Luc Godard, John Cage, and I would say Fletcher Henderson too.  Every track here is great for different reasons.  There are new ideas in each one.  I love that.