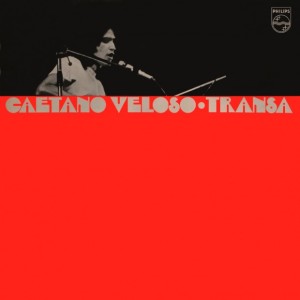 Here is an album for which its greatest strength is a sense of indifference, with the most recognizable features resembling an aftertaste.  Caetano Veloso seems distant on Transa.  The music has lyrics that are ostensibly personal, but the music throws together many different styles, from different cultures and geographies, rather carelessly. This stands in contrast to Veloso’s own description.  He considered it very deliberate, an album that reflected what he tried for.  Veloso has named this as a personal favorite of his own work.  This also frequently is named one of the best Brazilian rock albums.

The folk-rock of Richie Havens‘ Richard P. Havens, 1983 (1969) seems a fair comparison, though Veloso is inherently more musical in how quickly he shifts from one sound to the next and how disparate and diverse his influences are.  Perhaps even Love‘s Forever Changes (1967) is a fair comparison too, if nothing else because of the sense of inward reflection and the confluence of disparate styles.  But Transa is a more fluid mashup.  For instance, the opener “You Don’t Know Me” suddenly shifts from a mellow guitar line to a quickened pace interrupted by a stark and haunting ascending chord progression lifted from Hendrix‘s “The Wind Cried Mary” on electric guitar, then back to the opening pace, then driven to more intense singing bolstered by propulsive drumming, then by the end of the song the rockish instrumentation is dominated by flamboyant acoustic guitar noodling that inverts the buildup, allowing the song to wrap up with staccato rhythms that blend all the instruments together with Caetano singing in his most didactic and dramatic tone like a deathly serious European chanson à texte or poezja śpiewana singer.  The epic progression of the song is completely undersold, especially the way the very conclusion of the song seems to be an unresolved melodic figure, yet it is also the crux of how the song works.

You might say this is a completely existential album.  Albert Camus in “The Myth of Sisyphus” wrote, “There is but one truly serious philosophical problem, and that is suicide. Judging whether life is or is not worth living amounts to answering the fundamental question of philosophy.”  For Camus, this meant embracing the absurd, unreasonable world, without any guarantee of meaning, and accepting the need for revolt, freedom, and passion in the face of absurdity.  That is more or less what Caetano attempts here, privileging nothing and holding out no hope of any kind of transcendence.  This is, ultimately, what separates Transa from Richie Havens, Love, or any of the hippie artists of the North Atlantic region.  The song “Neolithic Man” has the lines “I’m in the silence that’s suddenly heard / After the passing of a car.”  What is this nonsense!  Indeed!  This is an album that requires acceptance that Caetano will ramble on about listening to reggae music and what nine out of ten movie stars will make him do (answer: cry), then turn to bongos and kitschy bass lines on a song that is a dirge for his home state in Brazil — he casually asserts that any music, commercial or artistic, can be used to make any point, all without any overt claims to experimentation with form or content.  Such acceptance does not come so easily.  And so, Transa may not be immediately appealing.  Yet it is an album for which an appreciation can grow.  I still prefer Veloso’s second self-titled album (AKA Álbum branco) from 1969, but Transa is nonetheless another excellent platter.