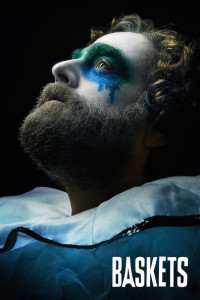 Situated between the films of Wes Anderson — sentimental tales of oddballs who fail to live up to their promise — and Louis C.K.‘s TV show Louie — eccentric, philosophical “dramedy” drawing from disparate elements of tenderness and cruelty — plus drawing on the past work of star Zack Galifianakis — full of sudden and futile yet endearingly harmless rage.  Louis C.K. (co-creator, co-executive producer and a writer of the show) seems especially prominent in influencing the way the show emphasizes the grandeur in the sheer range of opposites in human emotions and relationships.  It is the idea that sadness, heartbreak, anger and frustration are as valuable as satisfaction, joy and serenity.  Much of Baskets revolves around a particularly compelling vision of friendship and family, one that sees deeper value in people choosing again and again to stick together through fights, failures and temptations than in one-dimensional portrayals that are all smiles, hand-holding and shared values.  Pushing this a bit further, the point is that incongruous, even antithetical sentiments coexist in juxtaposition with each other without either merging into some kind of unified hybrid or one set of happy/good values victoriously dissolving an opposite set of values.  Many of the best qualities of the various relationships between characters emerge only after the worst qualities come out, and only because of that coupling.  The main characters stick together through often painful hurdles.  It is a paradoxical sort of triumph that embraces its own messiness.  Don’t wait for transcendence in this series.

The main character Chip Baskets is a “classically trained” clown (really a French mime) who moves back home to Bakersfield, California and takes a job as a rodeo clown.  He transitions from being “Renoir” the clown to “Baskets” the clown.  Flying in the face of the role of a rodeo clown — protecting rodeo riders from bulls — he performs pretentiously unhelpful artistic routines in the face of complete audience indifference, if not outright hostility, as the bulls run him down.  Galifianakis is forced to come to terms with one humiliation after another — often entirely self-inflicted — and with his life being seen as a total failure by most of the world outside a meager handful of companions.  He is hopelessly naïve.  Time and again he takes foolish pride in absurd rituals, inconsequential achievements and ridiculous demands — like going to a fast-food restaurant drive-through window and trying to order from a long list of obscure drinks such a place would never have, mentoring a fellow rodeo clown into the normalcy of a low-wage fast food job, or watching a short demo video that came with a new television set over and over again to marvel at the picture quality.  Despite his narrow pursuit of “classical” clowning he has almost no sense of social norms or how to earn a conventional living.  At least, he seems to avoid succumbing to the dictates of norms and conventions.  The show clearly has sympathy for him anyway, or maybe because of that intuitive, ersatz defiance.

Martha Kelly and Louie Anderson are fantastic in supporting roles.  The show (most of the way through the first season at least) never falls short on great performances.  The show comes close to a Felliniesque parade of grotesque characters, with a slant toward the pathetic.

This is one of the most arty and elusive shows on American TV.  At the moment it is also one of the best.