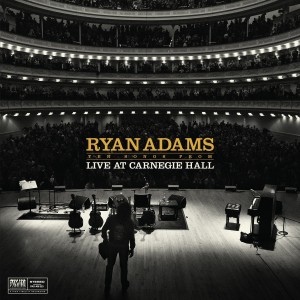 Ryan Adams comes across as a pretentious twat.  His music can overplay the histrionics.  In just about every marketing photo he has carefully tousled hair, probably a tattered jacket, and perhaps even a cigarette dangling from his lips.  And yet, in spite of all that, he can write good songs.  The ever-present burning emotional content is usually framed as existential crises of an individual navigating complex and difficult to the point of oppressive social relations.  This album, a selection of tracks from a larger, limited edition boxed set, is just Adams solo and acoustic.  There is guitar and piano, some harmonica.  The effect is a bit like when the urban folk movement of the 1960s sent its brightest starts to the Carnegie Hall stage.  While his vocals still retain the histrionics, and the between-song banter is chock full of pretentious twattery, the minimalist accompaniment limits how bombastic the performances can be.  The results are probably closest to his solo debut (and still best solo album) Heartbreaker.  He may be the singer/songwriter you hate to love, but the best of his talents are pushed to the forefront here.  Surely one of his very best solo records.