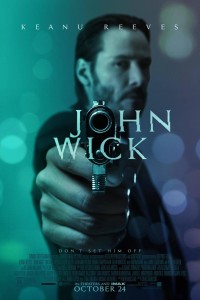 A standard tale of hubris & nemesis.  Hollywood makes a lot of movies like this.  But John Wick has a few things going for it that others don’t.  There is no gratuitous romantic subplot.  The fight scenes are also choreographed well — the bane of some many TV shows and big budget movies, where the bad guys seem to roll over and die because…well, because they are the bad guys and they are supposed to die.  Sure, John Wick (Keanu Reeves) is practically unstoppable, though his voyage back to through the fists and knives and bullets of a world of gangsters leaves him with plenty of scars.  The best part of this rather simple plot is that Wick does it all because somebody killed his puppy.  The bastards.