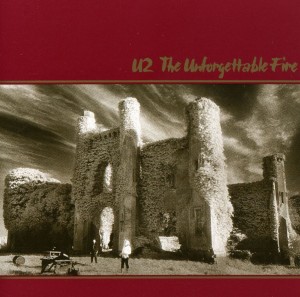 Perhaps The Unforgettable Fire is best viewed as a transitional album.  The Gang of Four influences noticeable on War had faded, and in place Brian Eno‘s production makes the record sound like more of a continuous sonic fabric bound by The Edge‘s delay-laden guitar.  Now everything seems designed to support Bono‘s voice, a big reason most love or hate U2.  Bono confirms here that he has only one vocal trick — the aching, dramatic cry — and he was going to use it on every song, forever.  While this album took the first steps toward establishing a distinctive sound that made the group superstars, it also feels like a mere warm-up for The Joshua Tree.  The biggest factor holding this one back is the songwriting, which is mostly less than satisfying.  It’s effective on “A Sort of Homecoming” and “Pride”, but the political subject matter gets old.  “Elvis Presley and America” is of course regrettable too.  This is still a fair U2 album, but War was more interesting and The Joshua Tree was much better at what The Unforgettable Fire actually accomplishes.  Pinned between better offerings, it’s easy to see why this is overlooked, even if it’s better than most U2 albums.