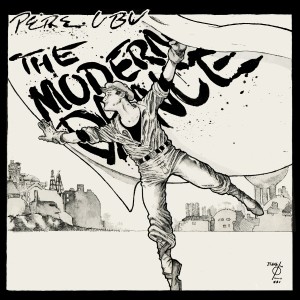 Pere Ubu made music in bold, sweeping motions. Their full-length debut The Modern Dance is a freewheeling album. It puts Allen Ravenstine‘s tape manipulation precariously in front of the rather isolated guitars. This album is much easier to decipher than its follow-up Dub Housing. The Modern Dance is quite open about its motivations. It looks for something new. The dang thing holds up because it found something new. But also because it makes a sincere effort to preserve the group’s own identity.

The Modern Dance still has a lot in common with the group that spawned them, Rocket from the Tombs. The Rocket song “Life Stinks” by Peter Laughner keeps the old energy alive — for the most part. Refined as it is, “Life Stinks” is still one of those songs that can rile even the most hardened listener.

I respect any band that refuses to fabricate straight answers. Sometimes there are none.   Sometimes there are only mangled lies showing the appearance of truth. Take “Humor Me” for example. It takes aim at the biggest joke in human history: western “civilization”. And with no apologies! While these continuous attacks on the social bell curve kept Pere Ubu an underground act, they also elevated the group to a level worthy of their namesake (the name Pere Ubu was drawn from Alfred Jarry‘s play Ubu Roi).

There are many levels of understanding the world. Some people just “get it” in a way others don’t. That’s what “The Modern Dance” is all about. Many things happen on levels that some march right past. Pere Ubu wasn’t just some band that heads for easy results-oriented nonsense. They came from Cleveland. So of course despair, isolation and suffering are the most familiar themes. More surprising though is how fatalistic The Modern Dance is. References to concrete destiny are everywhere.

The album’s best songs are full of many intricate layers. “Chinese Radiation” bleeds with sentimental washes from an acoustic guitar, running over the electronic background. A carefully deployed piano resonates with slowly pounded chords.

“Non-Alignment Pact” is genius as an album opener. It starts with a looping, screeching blast like a siren. Only after the noise has its time out front do the guitars and the rest of the band join in. “Non-Alignment Pact” is a great twisted take on a love song. Actually, I’m not sure it’s supposed to be a love song, but I hear it as one. Other love songs speak in the positive. This one is about not making other allegiances. What matters is what is excluded. A punk love song would almost have to be that way.

Pere Ubu’s next two albums (Dub Housing and New Picnic Time) improved on some of the stranger experiments of this debut. But The Modern Dance has its own kind of tightly channeled manic energy, and, frankly, somewhat more consistently catchy songs as such. Experiencing it is consistently refreshing.